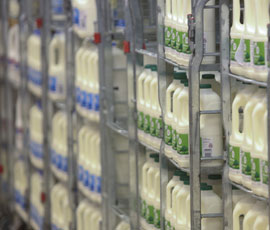 Dairy farmers are threatening to disrupt milk supplies during the Olympic Games in protest over the milk price cuts.

Four major milk processors, including Dairy Crest and Arla announced reductions in the prices paid to farmers in the past fortnight.

The NFU condemned the latest cuts to milk prices paid to producers, of between 1.65p/litre and 2p/litre, announced by Robert Wiseman Dairies, Arla Foods UK, Dairy Crest and First Milk.

The union has estimated that the cuts, due to come into effect from 1 August, will leave some farmers facing annual losses of more than £50,000.

And unless the processors reverse their decision to cut prices, they should expect action to begin as early as next week and carry on through the Olympics, he added.

“All the milk price cuts made between 1 April, 2012 and the present need to be reinstated by 1 August. If that doesn’t happen, then we will take action which will cause disruption to the milk industry,” said Mr Handley.

“We don’t want to disrupt the Olympics and it’s unfortunate that it falls around that date. But unless they reinstate that money, there is going to be disruption to milk supplies and that is going to affect what goes on within the Olympics. If they cannot get milk, then they have got a major problem.”

Mr Handley accused the government of failing the livestock and dairy industry.

“I personally find it offensive that the opening ceremony for the Olympics will include grass, sheep and cows when the UK’s livestock industry is in such a fragile place,” he said.

“The government has been completely ignoring the plight of the UK livestock sector. Yet they are going to try and convince the world that everything in the garden is rosy.”

Mr Handley said farmers would start taking action on Monday (9 July) by visiting supermarkets and talk to consumers about their plight.

An NFU summit is being planned in London on Wednesday (11 July) and farming minister Jim Paice will be asked to attend and listen to the views of a “huge number of angry farmers”, said Mr Handley, who is himself a dairy farmer in Monmouth.

Peter Kendall, president of the NFU, told BBC Radio 4’s Today: “Dairy farmers work incredibly long hours – these guys are at the end of their tether.”

However, the NFU has distanced itself from taking action to disrupt the Olympics.

“This is a monumental sporting event and something which Britain should be proud of,” said a union spokesman.

“In no way would the NFU support any action which would disrupt this historic event.”

• Have your say and vote in our poll