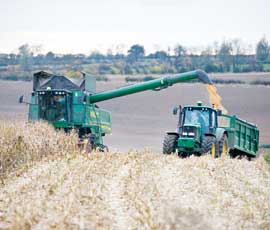 A debate is needed on the future of subsidies for renewable energy projects which encourage crops to be grown for fuel rather than food, farm minister David Heath has warned.

His comments come amid concern that livestock farmers wanting to secure supplies of animal feed and bedding are increasingly being priced out of the market by demand for fuel crops which has resulted in soaring values for forage maize and cereal straw.

Speaking to Farmers Weekly, Mr Heath said he believed anaerobic digestion had a huge role to play in creating energy from slurry and waste,which involved an element of crop feed. But there was a question mark over whether it was right to grow crops specifically for energy.

“We need to have a debate about that. I have been struck about the arguments that some people have put to me – in East Anglia particularly – that you need a way of disposing of [break] crops, and AD is a very effective way of doing it.

“But I have also listened to arguments of livestock farmers who say ‘We are crying out for fodder and yet we are seeing it diverted and distorting the pricing mechanism by it going into energy.’ These are decisions where we have to come to a view and we’re not quite there yet.”

Led by South West Norfolk MP Elizabeth Truss, a group of East Anglian MPs were due to meet energy minister Michael Fallon about the issue this week. Ms Truss previously raised her concerns about biomass subsidies and their effect on farmers with DEFRA secretary Owen Paterson in January.

Agricultural land should be used first and foremost to grow crops for food, she said.

Meanwhile, a renewable power plant due to start generating electricity this autumn at Sleaford in Lincolnshire is expected to burn 240,000t of straw annually once it is fully up and running. Further straw burning plants are planned at Snetterton, Norfolk; and Mendlesham, Suffolk.

A straw-fired power station at Ely already uses more than 200,000t of straw a year sourced from local farms on long-term contracts. Former farm minister Jim Paice, MP for South East Cambridegshire, will be among the delegation MPs to voice their concerns to Mr Fallon.

Sir Jim said: “The straw issue is part of it, but my concern is equally about land being used for anaerobic digestion as well. It is using farmland for energy. I am not against alternative energy – I think anaerobic digestion is a superb technology with huge potential.”

“What I am concerned about is that we are rigging the market with subsidies to the disadvantage of what I see is the primary function of land, which is producing food. It seems very odd that we are reducing subsidies for food production, yet we are ramping it up for energy.”

The Anaerobic Digestion and Biogas Association argues that technology is unlikely to pose a significant risk to food security or competition in farming. Energy crops can make a significant contribution to the economic and environmental sustainability of farming, it claims.

Bioenergy is needed to help the UK meet its renewable energy and climate change targets, and purpose-grown crops in anaerobic digestion are probably the best form of bioenergy available, says ADBA.

For more news and features on renewables, visit our dedicated Farm Energy area