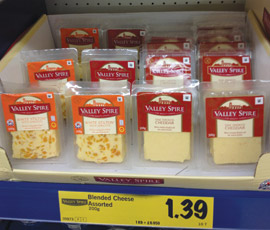 Shoppers may be missing out on British cheese and mistakenly buying imported products because of confusing signposting on retail shelves.


Farmers Weekly visited seven major retailers and found British and foreign cheese products stacked next to, or on the same shelf as each other, with no divisions to inform shoppers.


One of the worst examples was Lidl’s Valley Spire cheese. Both British and imported cheeses were packaged with the same Valley Spire branding and were on sale at the same price. Both were packaged in the UK by a company owned by the Irish Dairy Board.


Our picture, taken in the Lidl store in Basingstoke, Hampshire, shows the Valley Spire brand’s White Stilton in orange packaging, produced from British milk. Next to it, in the red packaging, on the same shelf – and in the same box marked with the Red Tractor logo, is the Valley Spire Oak Smoked Cheddar. It is produced using Irish milk.


Only discerning shoppers looking out for the Red Tractor logo on the pack itself would know that the stilton was UK farm-assured.


“It should be easy for the consumer to identify and buy British cheese made with assured British milk.”
Rob Newbery, NFU chief dairy adviser

Otherwise, shoppers would have to read the small print on the reverse of both packets to find out the country of origin for the milk used to produce the cheese.


A spokesman for Lidl said: “I can confirm that in our product, Valley Spire blended cheeses, we have four variants.


“Local sourcing of products is a topic that is of great importance to us. We have a large amount of British produce in our stores.”


NFU chief dairy adviser Rob Newbery said: “The issue of country-of-origin food labelling is an important matter for the NFU. Seeing labelling or shelf placement that misleads the consumer is extremely disappointing.


“It should be easy for the consumer to identify and buy British cheese made with assured British milk.”


A spokesman for DairyCo, the levy body that supports dairy farmers across the UK, said: “We want consumers to know that their food has come from a trusted source.


“We want them to look out for the Red Tractor logo which guarantees that the food meets defined British standards of food safety and animal welfare.”