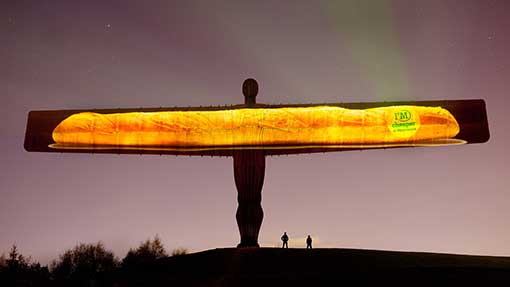 Supermarket chain Morrisons has apologised after it projected an image of a baguette across the Angel of the North.

The retailer used the famous landmark to beam an image of the bread as part of its latest “I’m your cheaper Morrisons” campaign to cut prices.

The 175ft image of the baguette and the words “I’m cheaper” appeared on the iconic artwork over the weekend, which is just outside Gateshead and Newcastle.

Morrisons announced last week it was slashing the price of 1,200 everyday items in a bid to rival budget supermarkets Aldi and Lidl.

The move could signal a supermarket price war, with rival chains expected to lower their prices as well.

Cash-strapped consumers will welcome any price cuts, but British farmers may be forced to pay the price in losses in revenue.

The latest Morrisons advertising stunt has been widely criticised, with many criticising it as “cultural vandalism”.

Angel of the North creator Antony Gormley told the Guardian: “I’d rather the Angel is not used for such purposes, but it’s out there.”

On Twitter, Patrick Ness (@Patrick_Ness) described the stunt as “philistine and disgraceful”. Others branded it as “tacky and embarrassing” and “dreadfully ugly”.

The NFU said it did not want to comment specifically on the ad, but it criticised supermarkets for driving a “race-to-the-bottom” campaign on food prices.

“Any of these tactics that devalue food are unhelpful for suppliers and are unsustainable,” said NFU head of food chain Debbie Cawood.

“We are concerned about the ‘race-to-the-bottom’ effect that lower prices have on the supply chain.”

Morrisons, which did not have permission from Gateshead Council for the stunt, has apologised if the ad caused any offence.

A spokesman said: “We’re sorry if you thought we got carried away by shining a baguette on the Angel of the North and apologise unreservedly to those we have offended.

“We were trying something different that was meant to put a smile on people’s faces, but clearly it wasn’t to everybody’s tastes.

“We’re so proud of our northern roots and the last thing we want to do is offend anybody.”

Dairy farmers have already accused the main supermarkets of threatening to put them out of business after they slashed the price of four pints of milk to £1.

In the past 10 days, several of the main milk processors have announced 1-2p/litre cuts to farmgate milk prices.