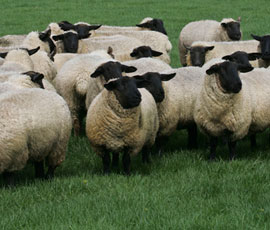 Morrisons will be launching a range of traditional breed lamb in the autumn.

Partnering with the Suffolk Sheep Society, Morrisons wants to encourage the use of the Suffolk breed because of its rich flavour and texture and it meets the needs of the commercial farmer, it said.

The pricing structure is yet to be finalised but it will involve a set price, which would iron out the troughs of lamb prices, said a Morrisons spokesman.

Once the program is fully up and running, it will be working with a pilot group of British farmers to produce around 1,500 Suffolk lambs a week.

Suffolk lamb will be marketed separately as part of the retailers Traditional British Meats Range.

“Following the success of our traditional beef and pork, we wanted to extend the program to lamb as well,” said Andrew Loftus, farm operations manager at Morrisons.

“The future of British farming is important to us and the extra confidence we hope this product gives to our farmers will be very welcome.”