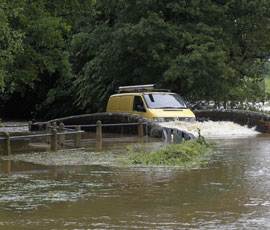 Farmers could run into trouble with existing mortgages if they lose flood insurance, surveyors warned at the RICS Rural Conference.

Recent changes to insurance rules mean that many farmers at risk of flooding will be unable to get flood insurance from June next year when insurers will be no longer required to cover high risk areas.

Being unable to insure the property against flooding could breach mortgage covenants if these were made with the agreement that insurance was in place, said Hugh Fell managing partner at George F White and RICS rural board member.

This could see landowners being forced to renegotiate mortgages and unable to borrow more money against assets as the value of the farm falls, he warned.

As well as affecting existing mortgages, the changes would affect farmers’ ability to sell their land, said chartered environmental surveyor Philip Wilbourn of Wilbourn Associates and member of the RICS flooding working group.

High risk properties were already hard to sell, and the problem is would worsen where there was no insurance available, Mr Wilbourn said.

“If farms are uninsurable, they’re unmortgagable and therefore unsellable. You cannot sell a property if a buyer can’t get a mortgage.”

Landowners needed to consider the impact of future climate change and think about selling now, rather than waiting for land to flood time and time again, said Mr Fell. “By the time you reach the stage where the land is flooding every three or five years, it could be too late and no-one wants to buy it. Buyers are already avoiding land in areas that could flood in the future as sea levels rise.”

“If farms are uninsurable, they’re unmortgagable and therefore unsellable. You cannot sell a property if a buyer can’t get a mortgage.”
Philip Wilbourn

Flood insurance was becoming a key factor in property investment, said Mr Wilbourn. High risk premiums of up to 60% may be applicable with high excesses.

“I’d certainly advise people to take into account the cost of insurance when investing in land or property,” he said.

There would be an increasing need for a flood risk assessment to demonstrate that adequate defensive work had been undertaken and insurers may want their own survey.

As well as deciding whether to buy, sell or hold, there were a number of ways that farmers can deal with flood risk.

“I’d advise farmers to remodel how they farm to ensure assets with the greatest yield are not at the greatest risk to begin with,” said Mr Wilbourn. “There is a need, however, for a longer term plan with mitigation measures.”

One of these measures could be better managing land upstream to prevent flooding downstream, said Mr Fell, or collecting, storing and using water at a later date – effectively “farming” it as a separate resource.

But even farmers not at risk of flooding were likely to be indirectly impacted, Mr Wilbourn warned, with signs that businesses beginning to avoid surrounding areas that have never flooded. “People would rather not take on the excess risk.”