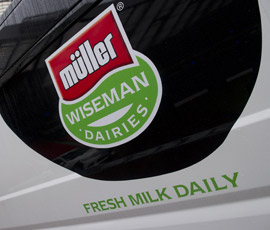 DO NOT USE OLD BRANDING

Muller Wiseman Dairies’ new formula contract will start at a price of 32.27p/litre.

The formula was launched last week and will be offered to the company’s 381 non-aligned standard litre suppliers.

Initially open for nine months from 1 July to a maximum of 110m litres, producers will be able to apply to sell a minimum of 10% of their milk volume (based on last year’s figures) for the full nine months. From 1 April 2014, a 12-month contract will be offered.

The formula, which tracks actual milk price equivalent (AMPE), milk for cheese value equivalent (MCVE) and a basket of competitor milk prices, will be adjusted quarterly with the initial price of 32.27p/litre set for the period between July and September.

“We think there will be significant interest in this option but we want to stress that the formula price will expose dairy farmers to more of the volatility which comes with a direct link with global dairy commodities.”

“But the first quarter formula milk price from July to September is some 0.77ppl ahead of the current Muller Wiseman Standard Price.”