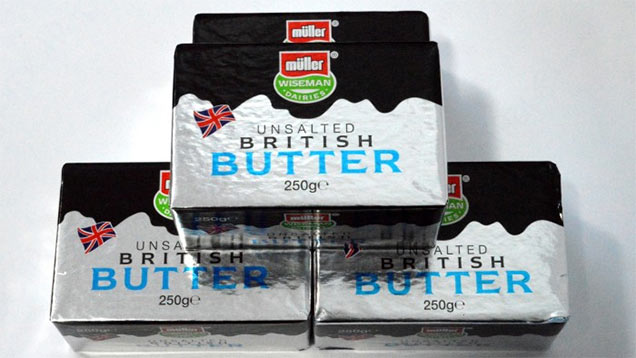 This week the firm revealed it would be using British cream to produce 250g packs of branded and own-label butter for food service and convenience retailers.

Since 2013, the company has been making block butter for food processing and manufacturing at its £17m plant at Market Drayton, Shropshire.

But this launch is Müller’s first effort in the retail market.

Last year the gap between Britain’s dairy imports and exports shrunk 12% to £1.2bn.

The proportion of UK butter in the domestic supply rose from 65% to 67% in the 12 months to November.

“We hope that by adding another string to our bow with quality, fresh British packet butter for private label and convenience customers, we can further displace these imports and continue to add value to every drop of milk we process,” Mr Ravenhall said in a statement.

The launch was unveiled at the Dairy Industry Newsletter Conference in London on 21 May.

He said the range of deductions meant it was difficult for farmers and competitors to work out who was offering what.

He said the market dynamics in the fresh milk sector were unsustainable.

“A key part our plan is to be more efficient and to have greater scale so we can be more competitive,” he said.

“Scale will help us to unlock the higher levels of innovation we need.”

When asked if his firm would negotiate with the newly formed producer organisation for Dairy Crest suppliers, Mr Jack said no decisions had been made.

“We cannot enter any formula dialogue with anyone associated with Dairy Crest,” he said.

“There is a lot of alignment between the two farmer groups [Dairy Crest Direct and Müller Wiseman Milk Group] and we expect to find a way that works for both.”