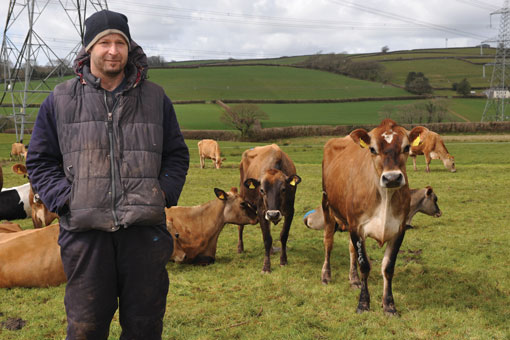 Debbie James finds out how one new entrant made the transtiion from sheep  farming to dairying.

A lamb producer who sold his flock to buy a dairy herd is making his investment work by adopting a simple and low-cost approach to milk production.

Steve Withers was running a flock of 900 ewes in Carmarthenshire while working as a relief milker on local farms.

Although he found sheep production rewarding, he believed dairying offered more potential long-term. First, he had to convince his bank manager that his plans were sound. “Fortunately she has a very good knowledge of dairy farming. She came out to the farm to discuss what I was planning and she was very positive about the ideas I had.”

Key to the process was a sound business plan. Mr Withers employed Cled Richards of Carmarthen-based Agri Angels to prepare his business plan and a budget giving a detailed break down of all the costings.

“We sat down and worked the figures out. That was important to the process because the figures had to stand up to being scrutinised.” Mr Withers recalls.

In addition to the money Mr Withers and his wife, Sarah, generated from the sale of the sheep, they had equity in the farm they owned. Sarah’s parents had been renting the 150-acre farm at Llandyfaelog, Carmarthenshire, and when it came on the market in 2010, Steve and Sarah bought it.

But it had no infrastructure for milk production, so investment was needed to establish a milking parlour and associated facilities. Mr Withers qualified for a grant of £15,000 through the Welsh Government’s Young Entrants Support Scheme (YESS), an initiative that entitles people under the age of 40 to apply for grant aid of up to £15,000 for capital schemes.

A lambing shed had been erected at Ystrad Fawr in 2011 and this was converted and extended to accommodate a 20/40 herringbone parlour, cubicle housing with 160 stalls, and a 200-foot feed passage.

He then used the money from the sale of the sheep to establish the dairy herd. He bought a herd of 100 Jerseys from a dispersal sale in Cumbria. The herd was from a TB-free region and the cows had a high health status.

He opted for Jerseys because they suited the grazing system he had planned. “Jerseys just get on with it, they are hardy cows and are good on their feet,” he says.

Half the Jersey herd is autumn calving and the remainder is spring calving. Although, the ultimate goal is to produce all spring milk, the current pattern provides a consistent income. “Because of the level of investment we have made, we will stick to producing a proportion of winter milk to keep the money coming in.”

The 150-cow herd was first milked in the new parlour on 2 April this year. “It all went very smoothly, the cows settled down well,” explains Mr Withers.

He has established a paddock grazing system and created some tracks to allow for grazing on the shoulders of the season. The soil is free-draining and dries out quickly. “Next year, when we have finished all the construction work, we will put more tracks in,” he says.

Although he is maximising grazing, his part-autumn calving pattern doesn’t allow for the entire herd to be out at grass for as long as he would like.

The autumn calvers were housed at night from 10 October and the spring calvers on 18 October, although this group will stay out by day until mid-November, or later if the weather conditions allow, with turnout in mid-February.

Good pasture management is key to the new system, ensuring the cows have the best opportunity of producing their maximum milk and solids output. The milk, which is sold to Meadow Foods, currently has a butterfat percentage of 5.4 and protein at 3.96%.

A grass plate meter is used every week in the grazing season to produce a feed wedge and this is used to monitor and budget grass growth.

Home-produced silage is fed in the feed passage in the winter and the diet supplemented in the parlour with 1.4 tonnes of concentrates a cow.

The autumn cows calve from 1 August for six weeks and the spring calvers from the second week in February until the end of April.

Mr Withers scanned the spring calvers at the beginning of October and, although 10% were empty, he accepts this figure as reasonable in light of the herd being relocated.

“These cows went through quite an upheaval so I’m pretty pleased with the scanning results. A few of the empties were older cows so I am happy to let those that are barren go. We will keep the best of the empties to join the autumn calvers, giving them one more chance.”

The spring group, which has a milk yield average of 5,500 litres, is artificially inseminated for four weeks before sweeper bulls are put in for four to five weeks. Hired beef bulls are used to inseminate the autumn calvers. “We use Aberdeen Angus and Limousin bulls for easy calving,” he explains.

The main focus is to keep the system as simple as possible, enabling him to keep control of his costs. “We are aiming for low cost, grass-produced milk from a one-man system,” he said. “I have a relief milker every other weekend, but the system has been set up in such a way that it only needs one person to run it.”