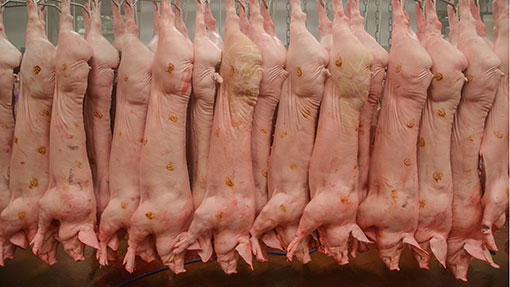 The plant is currently leased to Tulip, which will continue to manage the business for the new owners, Quality Pork Ltd (QPL). An EU marketing and processing grant has been secured to refurbish the plant and double production from 4,000 to 8,000 pigs a week.

Following the closure of Vion’s pig processing plant at Broxburn, Edinburgh, two years ago, more than 5,000 pigs are being sent south of the border from Scotland every week, either as weaners for finishing or finished pigs for slaughter.

“It will bring a measure of much needed stability to the pig industry in Scotland, which has been lacking for a long time, and give producers the confidence to expand, knowing they have a market for their pigs.”

The investment, estimated at almost £10m, will include a new slaughter line, additional chills and lorry wash facilities. Work will start immediately and is due for completion by next summer.

“The expansion will enable us to meet the growing demand for quality Scottish pork here in the UK, as well as export markets,” said Mr Stephen.

Pig producers are not being asked to subscribe capital for the development. In addition to the grant, bank support has been negotiated and the only requirement for producers consigning to the plant will be to become a member.

The new co-op has been formed as the vehicle to secure the grant as the turnover of Tulip is too big to qualify for support.

SPP and Scotlean will act as procurement agents for the plant and the five-man board will comprise Mr Stephen and his vice-chairman, Roderick Bruce, who will be chairman of the new co-op, and Scotlean chairman and vice-chairman, Richard Butterworth, and David Argo, along with a representative from Tulip.

The new co-op hopes to build on SPP’s initiative, with support from Quality Meat Scotland, in promoting Scottish pork as a quality brand, including the endorsement of the Scottish Society for the Prevention of Cruelty to Animals (SSPCA) resulting from the high welfare standards SPP members have been encouraged to achieve.

SPP markets pigs on behalf of 110 producers in north-east Scotland and Northern Ireland and last year achieved a turnover of £58m.