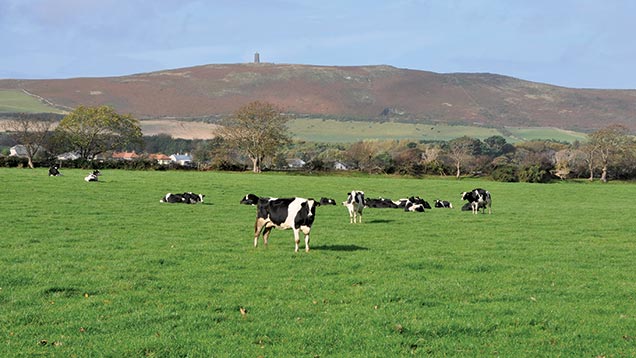 A new tenancy for a large, well-established and equipped dairy and stock farm on the Isle of Man is to be launched at the end of next week.

Ballamoar Farm, near Peel, runs to 585 acres and will be offered on an initial five-year term, with the potential for a further five years.

It offers a rare opportunity for younger, ambitious operators looking to move up the farming ladder, as well as more established farmers looking to expand their business, according to Knight Frank’s Christopher Smith.

“The farm is a unique prospect, given its location and size,” he said. “It will appeal to local farmers as well as those from both sides of the Irish Sea.

There are some really good examples of farmers who have moved from the mainland and done really well, and this is considered to be a good dairy farm on the island.”

Ballamoar has an extensive range of buildings, including housing for 200 cows plus followers, a 10:20 herringbone parlour and 10,000-litre milk tank, cubicle sheds, fodder storage, large silage pits, a machinery shed, workshop and a tower grain store.

The land varies from silty soils at the lower end of the farm that are suitable for silage and cereal production (about 331 acres), rising to stonier, steeper land that can be used for dairy followers, beef or sheep (about 254 acres).

The farm includes a substantial four-bedroom period farmhouse and a bungalow.

“Adding to the appeal are the low risk of TB – the disease is almost absent from the Isle of Man – a beneficial tax system and the opportunity to join a successful producer-run co-op,” said Mr Smith.

The Isle of Man Creamery produces milk, butter and cream that is sold on the island and exported to the north of England, Northern Ireland and further afield. Milk price reflects the retail price (set by the Manx government) and the wholesale market, and currently stands at 31p/litre.

The incoming tenant will also benefit from the island’s Countryside Care Scheme, which equates to about £80/acre. It is simpler than the mainland Single Payment Scheme, as it is based on acreage farmed rather than entitlements. There are 480 eligible acres included with the tenancy.

Ballamoar is available as a whole, but is also lotted three ways – the farmhouse and gardens, the dairy unit plus lower land, and the additional steeper land.

Open days are to be confirmed, as is the deadline for tenders, which is likely to be February or March. The tenancy is expected to begin in September 2015.