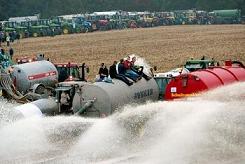 EU farm ministers meeting in emergency session in Brussels on Monday (5 October) failed to come up with any new measures to support the dairy market, making a fresh wave of “milk strikes” almost inevitable.

Among their demands are calls for a 5% cut in quota and increases in intervention purchasing and export refunds for dairy products. But last week they suspended their actions, pending the outcome of today’s meeting.

Addressing the council today, EU agriculture commissioner Mariann Fischer Boel explained that it was not possible to make any new proposals to support the dairy sector, as the meeting was not a “formal” one. But she did insist that the measures already taken by the EU Commission were working.

“Dairy prices are rising in the EU and outside,” she said. “And I’m not talking about tiny flickers of light in the darkness. I’m talking about clear, significant increases, almost across the board.”

Butter and skimmed milk powder were up 9% in three months, while producer prices in August were 26 cents/litre, compared with 25 cents/litre in July.

While she rejected calls to cut milk quota or increase intervention, she confirmed that her plans to allow up to €15,000/head in state aid to dairy farmers, and for a change to quota management, would be formally tabled at the next full council on 19 October.

Mrs Fischer Boel also gave details of a new High Level Expert Group, that would convene next week and meet monthly to consider things like contracts between farmers and processors and the future use of market support instruments.

A group of 20 member states, led by France and Germany, maintained their demands for stronger action to support the dairy sector. But their common communication has now dropped demands for higher intervention prices and bigger export refunds.

The meeting took place as farmers gathered in numbers on the streets of Brussels to put pressure on the ministers and commission.

“Milk prices have plummeted to the same level as in 1992 and many farmers are facing bankruptcy,” said COPA president Padraig Walshe. “I consequently urge ministers to rapidly agree on strong market measures, especially in public intervention and in export refunds on dairy produce, at their next meeting in Luxembourg to help solve the crisis.”

For a Farmers Weekly view on this story, see Phil Clarke’s Business Blog