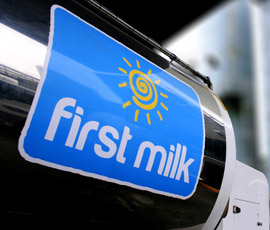 First Milk has confirmed that its dairy farmer members are to receive a bonus next month.

The co-operative said it would pay a 3% return on members’ capital in January, linked to “solid” business performance in the six months to the end of September 2011.

It announced last month that operating profit in that period increased £0.9m on last year to £4.7m, while pre-tax profit was unchanged at £3.2m, on turnover down slightly (£0.8m) at £272m.

“This is the third time in 18 months that we have paid out a return on members’ capital; over that period this has put more than £1,800 into the pocket of an average First Milk member,” chairman Bill Mustoe said.