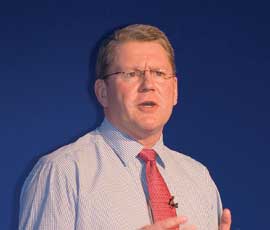 Candidates are emerging in an NFU leadership race that could see the election of the union’s first female deputy or vice-president.

With Peter Kendall (pictured) stepping down in February after eight years as union leader, the race is hotting up for the three officeholder roles of NFU president, deputy president and vice-president.

Mr Kendall’s decision to stand aside increases the likelihood that remaining officeholders will try move up the pecking order because they won’t have to challenge a sitting president.

It also means there will be at least one newcomer sitting on the NFU “top table” following the union’s presidential election on 25-26 February 2014.

Three potential candidates have emerged so far – including two female farmers who have confirmed to Farmers Weekly they hope to become either NFU deputy or vice-president.

Yorkshire farmer Rosey Dunn and Wiltshire farmer Minette Batters are both members of the NFU council, which is seen as a springboard for would-be officeholders.

Mrs Dunn produces beef and lamb in partnership with her husband Alistair and their son James on their 160-acre farm at Stockton-on-the-Forest, near York.

She is NFU council delegate for York East, NFU regional board chairman and sits on the NFU governance board nationally.

The family have have 180 beef cattle and 120 Suffolk cross sheep. Arable interests include wheat and barley, grown mostly for animal feed.

Ms Batters farms 120ha on a tenant farm on the Longford Estate in south Wiltshire.

The farm carries 100 continental-bred suckler cows, with males finished as bull beef, some sold as stores and the others finished and sold to local butchers.

The enterprise also includes a catering business and horse livery. Ms Batters is NFU county chairman for Wiltshire and a co-founder of Ladies in Beef.

Meanwhile, Somerset farmer James Small told Farmers Weekly he would give it “serious consideration” if he was nominated to stand for NFU vice-president.

Mr Small is NFU county chairman for Somerset and an NFU council member.

The family farm atop Cheddar Gorge is run as a partnership. Enterprises include extensive beef, sheep and outdoor pigs, a camping site and filming locations.

Current NFU deputy president Meurig Raymond has already confirmed that he hopes to take on the top job by standing for the position of NFU president.

Mr Raymond could face a challenge by current NFU vice-president Adam Quinney, who is yet to confirm whether he will run for the role of president or deputy.

Further candidates could come forward over the coming weeks as NFU branches hold their AGMs in the run-up to Christmas.