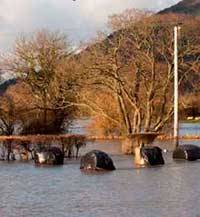 The strong performance reflected the loyalty of existing customers – 93% of general insurance policyholders renewed in 2009 – and there were also better returns from the stock market, group chief executive Lindsay Sinclair said.

The results were particularly pleasing given that investor confidence had remained dented for much of the year due to the recession, resulting in a 25% fall in new Life business; plus there was an unexpected rise in claims, from £706m in 2008 to £880m in 2009.

A significant volume of the large claims related to accidents on farms, such as those involving machinery or falls from height, he said. Last autumn’s floods in Cumbria added to the larger payouts, while there were also more insurance claims resulting from accidents involving foreign workers and young drivers.

In response, NFU Mutual has started a project to treble its risk management team, which advises farmers on safe working practices, from 25 to 75 people over the next year.

“We’d like to see health and safety get a much higher profile and we’re working with the NFU and HSE to communicate the causes of many accidents and measures which can be taken to prevent them,” Mr Sinclair said.

“We’ve also produced guidance booklets in other languages to educate people coming from cultures where health and safety is perhaps not given as much attention as it is here.”

Mr Sinclair said the company also planned to expand its network of regional offices, adding another 11 this year. “We’ve got incredible strength in our agency network and while the conditions were quite tough last year, we do believe in the long-term strength of the UK economy. The last quarter of 2009 saw investors coming back into the market as confidence improved and that has followed through into the start of this year.”

2010 marks NFU Mutual’s 100th year and to celebrate, Mr Sinclair said, it would double its Mutual Bonus payments to renewing general insurance policyholders this year. The move is set to return over £184m to customers, although payouts will vary depending on how long people have been with the insurer.

Those who have insured with the NFU Mutual for five years or more will receive a bonus worth 20% of their general insurance premium.