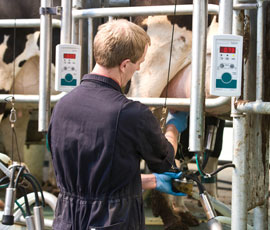 Buyers representing 2bn litres of milk production have still not signed up to the dairy code of practice, the NFU has warned.

In what amounted to a name and shame exercise, NFU dairy chairman Mansel Raymond said processors who persisted in refusing to sign up to the code included Glanbia Foods, Meadow Foods, Fairfields and Freshways.

“There is still a fair bit of work to be done,” said Mr Raymond. Retailers and all food service companies should insist that their suppliers adopt and comply with the code, he added. “The majority of buyers have complied but sadly others have not.”

Mr Raymond described as a major step last week’s decision by Arla Foods to adopt the code for its AFMP members from 1 July. “It took a bit of doing but they are on board,” he told NFU Council. “It gives AFMP members the right to terminate contracts if they agree with a price change.”

Laggard dairy companies were using various excuses to ignore the code, said Mr Raymond. More pressure from farmer-suppliers would encourage them to sign up, he suggested. The union will launch a dairy strategy at the Livestock Event, held at the Birmingham NEX on 3-4 July.

Dairy UK, which represents milk buyers, said the code should be seen as a success. An overwhelming majority of milk was now purchased by processors who had signed up to the code, it said. But there would always be a minority of buyers who would choose not to do so.

More news and features on the dairy industry