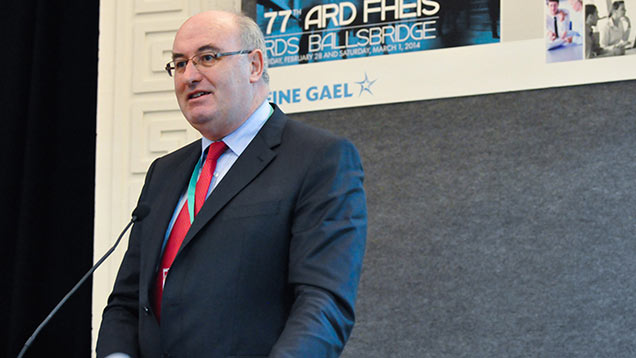 The EU farm commissioner has claimed milk prices are holding up well and there is no crisis in the dairy sector.

Speaking after a meeting of agricultural ministers, Phil Hogan insisted the average EU milk price was still up at 32 cents/litre (24p/litre) in November and global dairy auctions had risen in recent weeks.

He also confirmed the emergency scheme to keep butter and milk powder in store, opened after Russia’s import ban last August, would be extended to September.

“I am satisfied there is a considerable amount of profitability still in the dairy sector and there is no crisis.”
Phil Hogan, EU farm commissioner

“Market prices were falling during the summer months in any case before the Russia ban was imposed in August, but they have certainly held up substantially well since the ban came into place,” he said.

“I am satisfied there is a considerable amount of profitability still in the dairy sector and there is no crisis.”

Mr Hogan’s data came from the milk market observatory, a body set up last year to gather up-to-date information on prices and production ahead of quotas being lifted this spring.

He said the observatory had to be strengthened and he asked countries to meet their legal obligation to supply statistics.

“If there are problems coming down the tracks, at least we have the information from the member states so we have the flexibility to deal with these matters,” Mr Hogan said.

Responding to calls for more action, Mr Hogan said targeted cash had been sent to Finland and the Baltic countries as they had relied heavily on the Russian market.

He said the EU was looking to boost dairy exports by working on free trade agreements in new markets such as the Middle East.

And he stressed there would be no relief from superlevy fines for countries such as Ireland, Germany and the Netherlands, which have been running close to their quota limits.

“We would continue to urge producers to reduce their production,” Mr Hogan added.

Milk deliveries across the EU between January and November 2014 were up 5.1% on the year.

EU farm commissioner Phil Hogan acknowledged there had been a “substantial drop” in pigmeat prices linked to high supplies and Russia’s import ban.

He said the effects have been felt particularly in Denmark, where farmers had invested heavily and carried more debt.

Mr Hogan said 77% of the pork going into Russia had found new markets such as the Phillipines and South Korea, and he ruled out any emergency action for the moment.

“We will continue to monitor the situation to see if prices come up in the next couple of weeks,” he said.