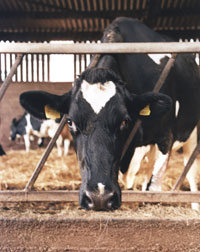 Ahead of Barack Obama’s inauguration as US President on Tuesday (13 January), Jim Dickrell looks at the effect George Bush’s successor could have on the American dairy industry.

The election of Barack Obama as the 44th President of the United States put many American dairy farmers on edge.

Conservative by nature, US dairy producers fear the incoming Obama Administration and its liberal Congressional colleagues will ramp up all kinds of mischief.

“I’m a total capitalist and I’m very concerned that we’ll end up with more regulations and more government involvement in markets,” says Cris Peterson, who milks 700 cows in Wisconsin with her husband, Gary, and son, Ben.

Undoubtedly, large dairy farmers have the most to lose.

Producers fear a revved up US Environmental Protection Agency, held largely in check by the Bush Administration, could restrict and limit operations even more.

While these large herds make up less than 5% of total dairy farm numbers, they produce nearly 50% of the nation’s milk.

US dairy farmers are wary of the incoming Obama administration

Harry DeWit, who owns and operates a 5,000-cow dairy an hour’s drive from Amarillo, Texas, is similarly cautious.

“I just don’t believe in the [more socialistic] principles of Obama,” he says.

“I was born in Holland, which is a very socialistic country and I left 22 years ago.

US dairy farmers have only recently become competitive on world markets and are now exporting about 10% of their milk solids.

Nearly a third of those exports are moving to Canada and Mexico. Reopening the NAFTA agreement could jeopardise that trade.

Then there is maize-based ethanol. President-elect Obama supports biofuels as a way to reduce the nation’s dependence on Middle Eastern oil and as a way to revitalise Midwestern, rural economies.

US dairy farmers blame ethanol for doubling – and for a time, tripling – grain and protein prices. As a result, their cost of production has jumped 40-50%.

On a positive note, President-elect Obama has promised to enact a more reasonable immigration policy.

With a clear majority in the House of Representatives and a near filibuster-proof Senate, President-elect Obama should be able to enact such reforms.

For US dairy producers, that can’t come too soon.

Perhaps as many as two thirds of the American dairy cows are currently being milked by Hispanic labor, many of whom likely are undocumented.