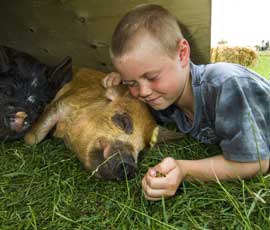 The organisers of Open Farm Sunday have announced the new theme for 2014-15 following this year’s record-breaking event.

The theme, “Celebrate British Farming and Food”, will reflect the growing consumer interest in buying British and an increasing demand to know more about how their food is grown and produced.

Open Farm Sunday event manager Annabel Shackleton said: “We believe the new theme is ideal, not only for next year, but also as we look ahead to Open Farm Sunday’s 10th anniversary in 2015.”

This year, more than 200,000 visitors flocked to 365 farms for the annual event, sponsored by Linking Environment and Farming (LEAF), which aims to raise the public’s awareness of the story behind our food and its link to nature.

Farmers will be able to register for Open Farm Sunday online from 1 December. LEAF provides support to farmers opening their gates as well as a full range of free resources.

“We’ve listened to feedback from farmers and this year we will be distributing certain resources, including posters and leaflets, from February, which is earlier than ever before,” added Miss Shackleton