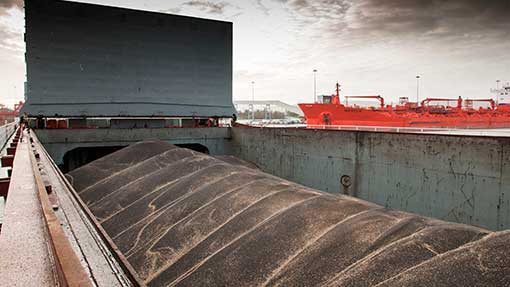 A shortage of GM-free oilseed rape among the exporters surrounding the Baltic Sea has forced Turkey to come to the UK in search of supplies.

Loading of the MV Palmali Confidence with 6,000t of oilseed rape from farms across the south west of England began on Friday (24 January) at the Portbury Grain Terminal, which is operated exclusively by Openfield.

It is understood to be the first export of its kind to Turkey from the UK. Loading would have started sooner, but the high winds that resulted in widespread flooding across the region delayed its entry into the port.

Turkey is one of the few countries to have a stricter policy on the permissible inclusion of genetically-modified organisms (GMOs) than the European Union and as such, in times of shortage it can make securing compliant supplies difficult.

Whereas the EU has a permissible level of 0.1%, Turkey adheres to a zero-tolerance policy. Meeting this requirement is further complicated by a shortage of shippers able to give the necessary reassurances that their vessels can meet its zero-tolerance rule.

Therefore, Turkey is being forced to look to suppliers in western Europe where shippers rarely encounter GM material.

Openfield head of oilseed rape John Thorpe, who handled the sale, said he was pleased to see this as a new destination for UK oilseed rape.

“Turkey has also bought cargoes from France and Germany this season, but with feed mills located in these ports it faces stiff competition for supplies,” he added.

“This has helped to support the UK’s position as has the competitive value of sterling prior to Christmas, despite being significantly further away.”

Recent news of the improving economy, however, has strengthened sterling against the euro and is likely to mean this is a short-lived marketing opportunity.

“UK oilseed rape is recognised as a quality product and buyers appreciate the traceability it carries, but it has to be price competitive too,” said Mr Thorpe.

“Given the shipping fees associated with such an export the recent improvement in the value of sterling means there is unlikely to many more cargoes heading to Turkey again in the near future.”