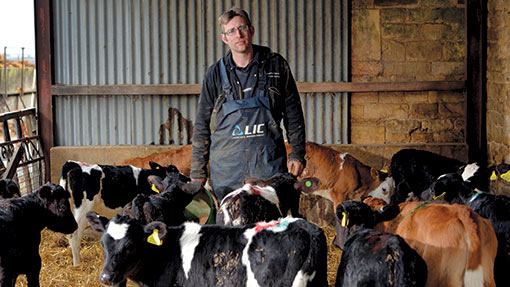 NFU dairy board chairman Rob Harrison has been critical of the current milk price protests. Here he tells Farmers Weekly why and sets out his views for a brighter future for British milk.

Why is the NFU so opposed to protests? What are your concerns?

The NFU does not oppose peaceful and lawful protests. I have taken part in NFU-led protests in the past as part of targeted and structured campaigning and lobbying. I understand that some dairy farmers are frustrated and want to do something about this awful situation.

See also: Dairy crash dissected: How we got here and challenges for the future

However blockading dairies is not a sensible option when, for me, it is not clear how or if it will actually deliver more money for farmers. We need to look at what changes are necessary in the industry for farmers to achieve fair and sustainable milk prices, and that is a long-term exercise.

Dairy farmers need to work with their elected producer representatives, who are in the position and have the mandate to represent their interests to the processors and make representations about prices.

We are working across the industry to increase trust and transparency and have made progress with this through the voluntary code on contracts. Arla has a massive influence in the UK now and it is owned by farmers.

Ultimately as an industry we need to look forward not backwards; we’re now exposed to the world markets and long term we can’t blockade every time markets go the wrong way. You can’t play or rig those world markets, so we need to look at how farmers can plan for the volatility that seems to be here to stay.

Does the whole of the NFU dairy membership share your views? What proportion are in favour of protests?

What we know is that farmers want a better milk price, so inevitably if they are told protests will achieve that, it’s tempting to say let’s give it a go. I’m fully aware that some of our members believe a more direct approach is the right way. While we can’t tell the exact proportions, we will use our democratic board structure to guide us.

The dairy board is united and a lot of members and non-members have spoken to me in support of our stance. I have spoken to members who are part of both organisations and I have taken their views on board. The one thing everyone seems to agree on is that a divided industry is a weaker one.

Do you regret labelling dairy farmers who blockaded dairies as a “little bit idiotic” especially when some are NFU members?

That was in reference to blockading to stop tankers picking up farmers’ milk. I still believe the only way to address the short-term problems in the market will be by working with milk buyers, not against them. I should point out that I don’t think farmers are idiotic for looking for ways to improve their situation – we just need to look for more constructive ways of doing so.

Why isn’t there more unity  among the dairy industry bodies? If you look to the industry bodies – companies, retailers, processors, feed companies – that signed up to “Leading the Way” I’d say there is unity. We mustn’t let questions over tactics in the short term damage that.

What do you say to farmers who are having to produce milk at below cost price?

It has come as a shock to some, but we are now in a market which will deliver record highs and record lows of price on probably a two-year cycle.

We need to embrace that volatility, learn to manage it and most importantly do better than our competitors in Europe and around the world.

It’s about recognising and embracing the new model. In the short term, I can’t wave a magic wand to bring milk prices up to meet any producer’s cost of production and you should be sceptical of anyone other than your milk buyer who says they can.

Within our businesses we all need to build on our strengths, identify our weaknesses and compete.

Do retailers and processors have a responsibility for the current situation or is it all down to world markets?

Retailers and processors ultimately have a responsibility to work with farmers to find more sustainable ways of doing business, to ensure the longer term survival of dairying in the UK. Rather than applying pressure on producers, they need to work with us. We know it’s a very competitive environment, but the NFU will highlight and expose where bad practice has taken place.

Ultimately there is no avoiding the effects of world markets and volatility, which is a challenge and an opportunity for everyone in the supply chain, but there must be tools available to reduce the impact where possible.

There are many farmers that have borrowed and invested heavily and are now suffering. This is an awful situation and we need to ensure the tools are there to help businesses make long-term plans in a volatile global market, just as other sectors can.

As an industry we need to have more grown-up conversations about the structure of the industry, and production and processing capacity. The UK dairy industry’s “Leading the Way” strategy plan is the start of that process. We benchmark ourselves against other European countries and our price is competitive

What is the NFU doing to address the problems in the milk industry?

We will continue to lobby government for help with exports, better country-of-origin labelling and to reduce regulation to make sure we are competitive. There is a lot of work being done in Brussels to try and support markets with particular reference to the Russian ban.

We will continue to talk to processors and retailers about fairness and transparency, and to present the industry to consumers. Our work started before the price crash and will continue a long time afterwards.

UK farmers can look forward to a growing share of a growing market if we can remain competitive. Helping our members remain competitive will remain our focus. As an example, our fight to eradicate bovine TB will ultimately do far more for the long-term sustainability of the dairy industry in the UK and is a fight we are putting huge resource and attention towards.

What are the NFU’s short- and long-term plans for addressing the current situation?

In the first 15 years of my dairy career we tried to isolate ourselves from the world and that led to declining production and low prices. There is a growing demand for dairy and long term we could have a huge advantage if we can grasp it. For me, the short- and long-term solutions are the same.

The NFU is putting a great deal of effort into our consumer campaigning with Back British Farming, and will continue to keep the plight of dairy farmers in the eyes of the consumer through the media.