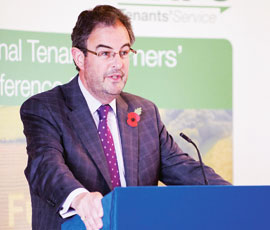 The tenanted sector faces many challenges but there are opportunities, too, delegates heard at the NFU’s tenant farmers’ conference at Harper Adams University College. Simon Wragg reports.

Land buyers from outside the industry are often criticised but they offer many the chance to farm or expand, said Julian Sayers, who heads up the Tenancy Reform Industry Group.

“Some people don’t want to farm the land they own,” he said. “People say isn’t it awful, all these wealthy people coming out of the cities and buying land. No it is not. It creates opportunities for others to farm it for them. It’s always happened.”

Improved communication between landowners and tenants was essential for flexible, workable tenancy agreements to be set up and managed as tenanted farm businesses grew, said Mr Sayers.

Opportunities offered a whole range of landowners must include agreements that are long enough, balanced enough and flexible enough to enable tenants to invest, said NFU president Peter Kendall.

Succession was a key area of concern for tenants, but there were opportunities to exploit, said Mr Sayers.

Careful planning, thought and advice was needed, as well as negotiation but some tenants held keys to unlock tax advantages for landlords.

“If you have a current and secure Agricultural Holdings Act tenancy on a parcel of land and are not sure whether you’ll get succession or not, you do actually have a tax advantage that you as a tenant can offer to a landlord.

“By doing surrender and re-grant you can move a landlord from the 50% Agricultural Property Relief tax bracket to 100% APR,” he said.

Although this could effectively mean giving up one generation of a succession tenancy, it could also guarantee securing a tenancy  where succession may be uncertain.

Key areas of difficulty in landlord-tenant matters were diversification and agri-environment schemes such as the Uplands ELS. TRIG, which was established in 2002, offers guidance booklets on some of these key issues for tenants and landlords.