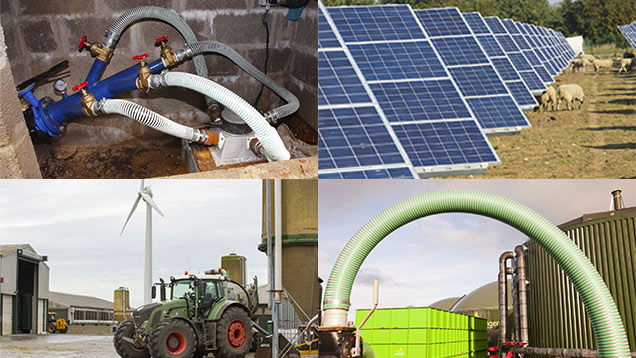 Political attitudes to renewable energy will play a key role in determining future opportunities for farmers and landowners. With less than a fortnight to go until the general election, Paul Spackman examines the manifesto pledges of the main parties

Claiming to be the “greenest government ever”, the Tories say they support the UK Climate Change Act and are keen to cut greenhouse gases as “cost-effectively as possible”. But their manifesto has sparked criticism from the renewables sector, not least for plans to end subsidies for new onshore wind farms. Wind industry body Renewable UK deputy chief executive Maf Smith has called the proposal “idiotic”.

“Overall, this is an anti-green growth, anti-clean energy manifesto that will only find favour with the dwindling bunch of fossil fuel advocates who still donate to the Conservative party and thus dictate their energy policy,” he said.

The NFU is not commenting on individual party manifestos, but chief renewables advisor Jonathan Scurlock says the union’s two main requests of all major political parties are to:

The manifesto fails to mention key technologies such as solar and biomass, with most focus on promoting energy efficiency and a significant expansion in new nuclear and gas (including shale gas).

Ambitious emissions targets to tackle climate change are at the centre of Labour’s energy policy. It sets the goal of becoming carbon neutral (i.e. carbon emissions are balanced by mitigation measures) in the second half of this century and for all UK electricity to be carbon-free by 2030.

The Lib Dems also have a strong focus on cutting emissions, with a target for Britain to be zero-carbon by 2050. While they are keen to reduce waste and encourage recycling, solar again fails to get a mention and they also favour ending support for crop-based biofuels after 2020.

Renewable energy is a key policy area for the Greens, who want a 90% reduction in UK greenhouse gases in the next 15-20 years and a zero-carbon economy by 2050. There is support for most renewable technologies and a number of ambitious targets, including: