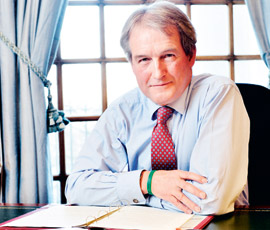 DEFRA secretary Owen Paterson is to lead a UK food trade mission to Russia to promote the best of British food.

In September, Mr Paterson will join food and farming business representatives, members of beef and lamb industry body EBLEX and others on the biggest UK delegation of food and drink companies seen in recent years.

He will visit the World Food exhibition in Moscow, held between 16 and 19 September, to fly the flag for great British food and open up trade by promoting UK food and drink exports.

Russia, like China, India and Brazil, is seen as a great opportunity for British exporters as official government figures show demand for British products continues to increase. Last year, UK exports to Russia grew by 11.7% to £5.6bn.

Since 2000, UK food and drink exports have grown by just over 220% to over £121m, but the government believes there is still huge potential for the UK to do more.

At the end of last year, Russia lifted its 16-year ban on British beef and lamb imports. DEFRA welcomed the move saying it would provide a “lasting legacy of opportunity for thousands of British food and farming businesses”.

A DEFRA spokesman said: “In Moscow, Owen Paterson will continue to work with Russian authorities so that this trade agreement can include beef and lamb offal, enabling businesses to profit from something which is often wasted in the UK.

“There’s high demand for offal in Russia, by making this part of the deal, exports of beef and lamb to the country could be worth up to £100m over three years.”

Last November, Mr Paterson spent four days promoting UK food and drink in China in a bid to boost trade with the Chinese, in particular chicken, beef and lamb exports.

The food and drink industry, our largest manufacturing sector, contributed £96.1bn to the UK economy last year, employing nearly four million people. Exports have risen by nearly 5% in the past decade, to the value of £18.2bn

Lochhead calls on DEFRA to aid exports to Japan