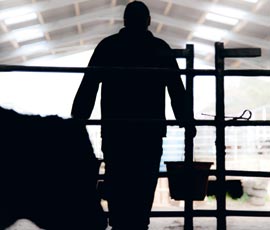 The majority of people working in agriculture would recommend it as a career choice, according to a Farmers Weekly survey. The survey was conducted online in association with De Lacy Executive and was completed by a total of 1,300 respondents during October 2013.

Responses were separated into farming workers (FWs) and those working in agriculture-related business (ARB).

The agricultural industry as a whole got a resounding vote of confidence from its labour base. More than three-quarters of farming workers said they would recommend it to people as a career choice and an even better figure, close to nine out of 10, in the allied workers gave it a thumbs up.

Most employees in agriculture are paid a salary – 59% of farming workers and 84% in related business – rather than an hourly rate.

By comparison earnings in allied businesses were higher. Just 1% of workers in related businesses earned less than £10,000, with an average salary of £34,158. The difference between male and female earnings, for both ARBs and practical farming, was stark at almost £8,000, with males at £31,768 and females £24,020.

Broken down further, the figures reveal that relatives of farm owners are not drawing full salaries. The average recorded wage for these people was just £12,616. The highest wages were for farm managers, who earned roughly £10,000 more than the average wage of £25,565.

The biggest earners in related businesses were technical managers at £40,111 – above the average of £34,158.

The UK average hourly rate for all types of industry is £12.76. But for farming workers the overall is just two-thirds of this amount at £8.74/hour, while related businesses earn a better rate than the UK average at £14.33/hour.

In contrast to those paid salaries, female workers earned more (£11.14/hour) than their male counterparts at £9.90/hour. Workers in related businesses earned on average 40% more than those who were farming, with an hourly rate of £14.33.

Salaries and hourly rates of pay showed marked variations across the UK. In Scotland, the north of England and the West Country the earnings in practical farming were between £21,319 and £24,146 – all below the national average.

But in the South East, East Anglia and the Midlands wages varied between £26,083 and £29,474. For allied industry workers salary also varied across the regions, but the pattern of areas earning the highest and lowest was different.

For those paid an hourly rate, agriculture workers were again best off in Scotland and Yorkshire at £9.73/hour. The lowest hourly rate was in the north-west of England at £8.02.

The statistics also show a link between higher earnings and sector type. On farms where crops were grown, respondents recorded a higher average wage.

All crops businesses paid more than the average earning and this compared starkly with incomes for those whose main business was livestock-based, which all fell below the average.

While most (69%) have received a pay rise in the past 12 months, 7% of farming workers have not had an increase for more than five years.

Results for pay reviews showed the farming workers fared less well than their counterparts in the allied industries. More than half (58%) of farming workers received a salary increase of about 1.5%.

This is in line with the UK national average workers’ increase across all industries (1.4%). In contrast, related businesses paid more than three-quarters of their staff a rise which on average was double the national rate at 2.8%.

Almost two-thirds (60%) of employees in the related businesses received a bonus of an average £2,884. Workers in animal nutrition received the highest financial boost to their pay packets at an average across their sector of about £4,338.

At 43.9 hours, the working week of the agricultural-related business is about the same as the national average of 43.6 hours. But for farm-based workers the week is 20% longer at 52.1 hours. At busy times of year one in five workers on farms are putting in more than 100-hour weeks.

Both the related businesses and farming workers failed to take the legal national entitlement of 28 days – averaging 19.9 days and 14.6 days respectively. More than 15% of farmworkers took no holiday at all.

Half of all farmworkers (46%) and close to one-third (30%) of those in the related businesses received no official training in the past year.

There was a marked difference in the type of qualifications held by respondents. Farmworkers tended to have more practical qualifications that fitted their occupation, such as national diplomas (25%), while workers in the allied industries had generally reached degree level and above (51%).

It is encouraging to see how passionate and proud respondents are of their industry. It is all the more surprising, therefore, that we have such a shortage of people to fill challenging vacancies.

If we are to minimise the effects of the looming talent crisis, we all have a responsibility to join the initiatives, which have already begun, to broadcast the industry’s benefits and importance to those who have not yet considered agriculture and its associated sectors as a career.

We should also try harder to give those who do want to join us a chance to enter the industry and to give them the support they need in this fascinating, highly technological and vital industry.

The results of this collaboration between De Lacy and Farmers Weekly answer many questions for employers and employees alike – and raise many more for investigation next time.

The agricultural sector has had mixed fortunes during the past year, with some stock farmers suffering great hardship due to extreme weather conditions, but generally commodity prices have been better.

The survey results are reflective of these factors, with the lowest rewards going to those who have suffered more than any by the long wet 2012 and then an appalling start to 2013.

Average hours worked still remain high and the opportunity for working extra hours is still great. In my view this really reflects the nature of the work, which has heavy seasonal demand.

Every encouragement must be given to bring more young people into this sector, and this is borne out by the high percentage of workers that have been with their present employers for 20 years or more.

The industry needs to be attractive to newcomers and the only way that is going to happen is to have a vibrant, secure sector.

It is alarming that a high proportion had no training in the past 12 months. This could reflect difficult economic times during the past year.

But we need this to change; it is vital for competition. We need to professionalise the industry and look at it less as a way of life.

More workers should be paid an annual salary. It says more about professionalism and would attract and keep people in our industry versus an hourly rate.

There is, though, a terrible discrepancy between male and female pay, which must be addressed.

It’s pretty dismal that career prospects were thought to be so low. We have to make it clear that there are good prospects or workers will leave.

Hours are high and holiday entitlement low. I suspect some workers and employers need to look at this.

Both workers and employers need to be aware of workers’ rights. While the average of £30,100 shows agriculture is not a low-paid sector, the 13% of farmworkers being paid less than £10k is a real concern.

This could relate to part-time work or family labour. Pay rises for farmworkers are significantly lower than in the allied industry, which could reflect the tough times farming has gone through in the past year.

The degree of variation between regional pay rates is surprising. However, this is more related to variations between the sectors – combinable crops and livestock – than region alone.

Nevertheless, benefits such as housing and the outdoor life make it a better package and a career well worth considering.

For all the concerns about different issues, the fact that 77% of farmworkers would recommend a job in the sector is positive.