Many farmers want to improve the resilience of their business by innovating or diversifying – but the level of investment required can be daunting.

A Bedfordshire livestock farmer has diversified by using £16,000 of Leader funding to help buy a butchery unit and catering trailer.

Rob Pratt runs Marbled Meats from his family farm in Northall, Leighton Buzzard, where they have about 2,500 ewes and 150 Wagyu cows. 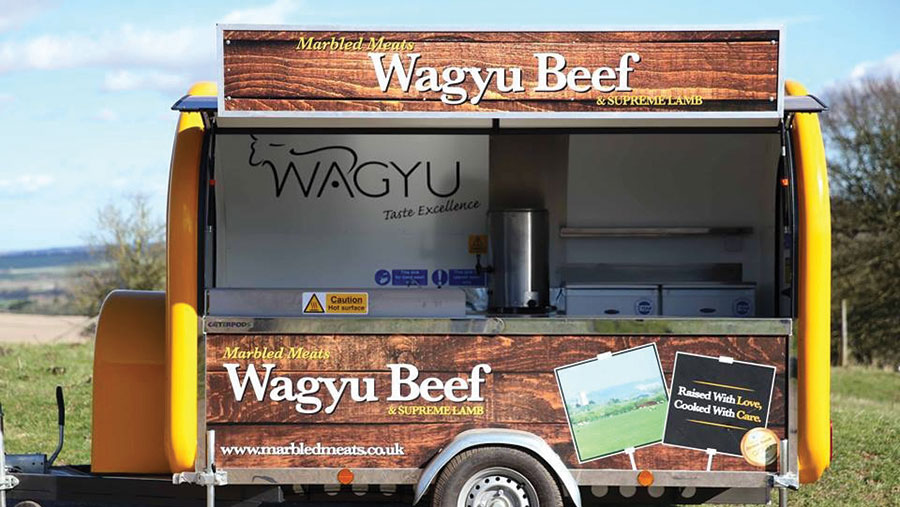 The funding means he is now able to process carcasses and sell the meat direct, allowing him to keep control of the animal from farm to fork and avoid relying on others to process and sell on his behalf.

“We are livestock producers doing our best to achieve a premium for our product,” he says.

“We are looking to produce the best-quality meat we can and use its provenance as a point of difference, so we wanted the ability to take the animal right through to the end consumer.”

Mr Pratt says getting the funding gave him confidence to take his project forward.

Since taking delivery of his new catering trailer, he has employed a fully trained chef and another part-time employee.

They started operating this summer and have catered for a range of events from weddings and parties to farmers’ markets and shows.

It was between Christmas and New Year 2016 Mr Pratt decided he wanted to apply for a grant and he wanted to have a go at putting the application together himself.

Parts of it were quite repetitive, he says, and for others he needed guidance from the programme manager.

“My message is if you have a good Leader manager then you can do this without using a land agent, but you probably will need hand-holding through the process.

“The Leader team were there every step of the way with me. It felt like they were on my side and wanted me to get the funding.”

Arable farmer Philip Bradshaw was awarded a grant to help purchase a Weaving GD Drill which is facilitating a move to no-tillage crop establishment. 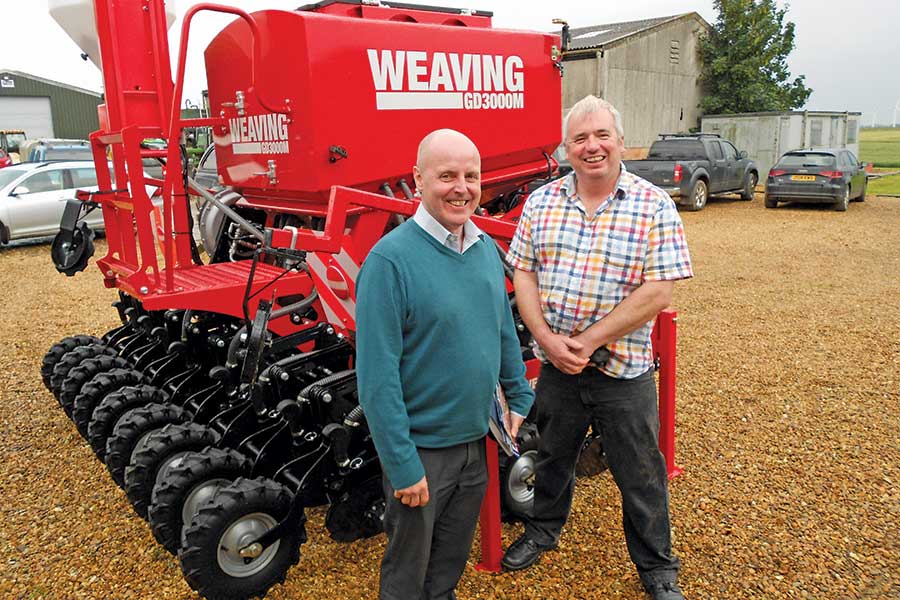 The grant was awarded on the basis that a no-till system would reduce greenhouse gas emissions and improve the sustainability of his 220ha farm.

The grant offer was conditional on him sharing his experiences through open days.

“That’s not to say I think I am the expert on what to do,” he says.

“It is more about sharing my experiences – both good and bad, so that others can learn from what I am doing.

“However, I am pleased with the drill.”

The benefit of no-till is reduced establishment and inputs costs, while hopefully increasing yields and protecting and enhancing our soils.”

Had he not got the funding, Mr Bradshaw says he probably would have had to buy a second-hand drill and refurbish it, but the money enabled him to acquire a new drill with the latest technology. It arrived on farm in June 2016.

The application process itself involved a significant amount of work, he says.

But he was supported by a very helpful Leader management team.

It took six months from submitting the application to receiving the grant money.

Mr Bradshaw points out while he sits as a board member of his Local Action Group, he had no role in making the decision on his own application. 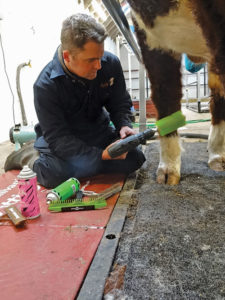 Husband and wife team Robert and Linda Wilson are just days away from opening a novel diversification on their traditional family farm in the Scottish Borders.

The couple spent the summer renovating a 1920s stable block so they can offer hands-on “experience days” for people to learn about livestock showing and working a sheepdog.

They will also be offering expert training to people already engaged in the livestock industry, who want to gain more knowledge of how best to prepare stock for the show and sale ring.

Mr Wilson is an experienced cattle exhibitor, running a long-established herd of Romany Poll Herefords at Cowbag Farm near Kelso.

The business, called Fluffy Moos, will welcome their first booking on 4 October.

The project has become a reality thanks to a grant of £37,000 from the Scottish Borders Leader group, which contributed to the costs of renovating the building.

“As I understand it, there is a relatively low occupancy rate for rental accommodation in the Scottish Borders, so the Local Action Group are looking towards businesses that will attract in people. There should then be a multiplier effect for local accommodation providers.”

It took Mr Wilson at least a week to complete his application, with requirements including financial projections for the business over the next three years.

“The Leader team was very helpful both while the application was being made and subsequently while funding is claimed back, so no applicant is on their own.

“However, my advice is that it is also worth taking time to talk to people who have already done it, to get their guidance.”

A Hampshire turkey producer has been awarded £12,500 by the New Forest Leader group to help with the costs of installing a temperature control store for the storing birds at Christmas.

The farmer, who asked to remain anonymous to avoid being targeted by thieves, has turned an existing barn into a cold store by insulating it and adding in an electric refrigeration unit.

The business finishes 4,000 turkeys for the Christmas market and after two warm winters, decided the investment was essential if they were to maintain the quality of their birds.

As the business has grown, it has been necessary to start killing progressively earlier in December, so the birds need to be stored in the right conditions until the customer is ready to pick them up.

The farmer says the store, which was operational for Christmas 2016, has made a massive difference to the business.

“It took so much of the worry out of the job. The store will also help us with our plans to expand over the next five years, which will enable us to take on an extra employee.”

The farmer says he found the application hard work, partly because they have to be submitted online and he has limited computer skills.

“I think it is a very good opportunity and people shouldn’t be put off by the paperwork.”

Arnold Farms based in Ombersley made a successful application to the Worcestershire Leader team for more than £30,000, which has been used to help fund new irrigation and fertiliser application equipment.

Farm manager John Baines says he made the application on the grounds that it will help the business to improve nutrient management and water efficiency. 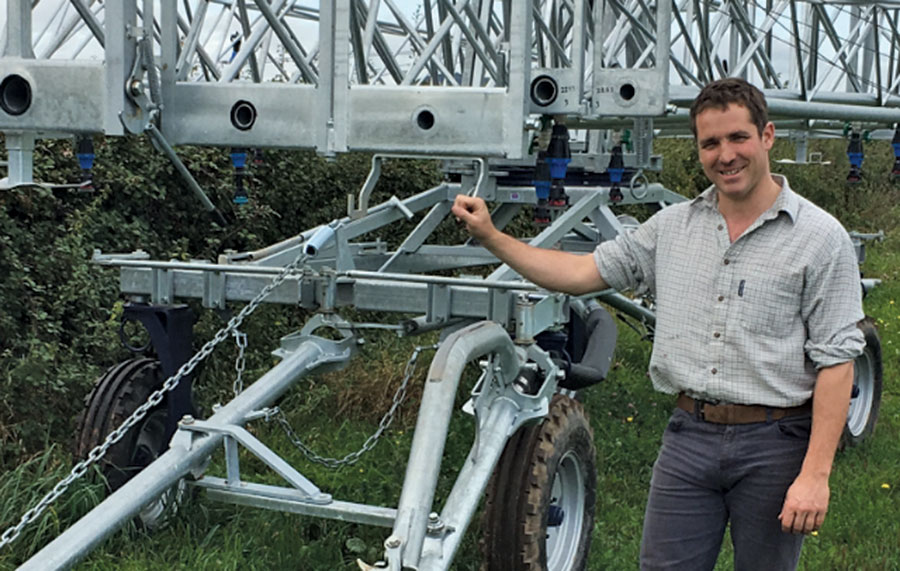 The money has been used towards a Kverneland Geospread Fertiliser spreader, a wide irrigation boom with low-pressure jets and a new electronic irrigation pump system.

It will also limit soil damage across the farm which grows potatoes, sweetcorn, rhubarb and herbs, along with cereals as a break crop.

“We’ve also been able to put a brand new irrigation main down to the river, along with a very efficient electric pump and controller.

“It is going to make a huge difference next season – as we can regulate the pressure more accurately, so save energy by running it at a lower pressure.

“I will also be able to control it with a mobile phone. This will save so much time, driving around the farm.”

His advice for anyone considering making an application is to tailor the project to the criteria set out by the LAG, so it offers good value.

The application itself was completed by a local land agent.

“This did costs us, but if we hadn’t gone down that route I doubt we would have got the funding.”