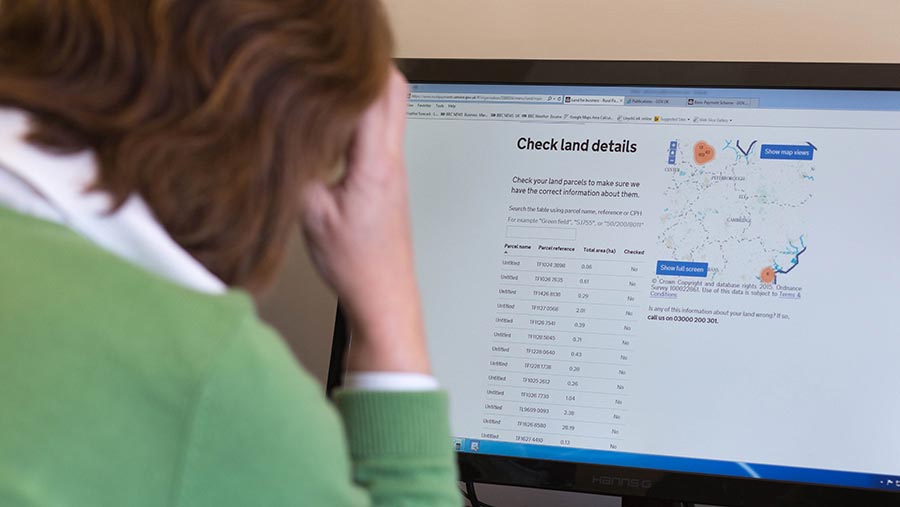 With less than nine weeks to go until the 16 May Basic Payment Scheme deadline, farmers say they are nervous and confused about their 2016 claims.

Farm leaders in Scotland have warned that confidence in the Scottish government’s IT system for applications is low and they will be monitoring performance issues closely.

And in England, the NFU has said it is hearing “a lot of concern” about whether 2016 maps and 2015 payments are correct, with some producers still reporting they received less money than expected.

The union has warned that, until people see their 2015 claim statements and are satisfied their applications were processed properly, it is difficult to approach this year’s claim with confidence.

To date, just 1,000 statements have been sent to farmers by the Rural Payments Agency despite the fact that more than 70,000 farmers have now been paid their 2015 money out of 87,000 claims.

One farmer from Oxfordshire who contacted Farmers Weekly, but who asked not be named, said he felt unable to start his 2016 application because so much was wrong with his 2015 claim.

He had only been paid about three-quarters of what he had expected and, when he had looked online to check the RPA’s information, he discovered three fields totalling close to 20ha had been omitted, while some ineligible features had not been excluded.

John Charles-Jones, an NFU council member who farms in Nottinghamshire, said he had been unable to log into the online system using his customer reference number, although he eventually managed it through the Gov.UK Verify option.

One field had been missed off his claim completely and half of his 30 fields had seen their eligible areas unexplainably reduced.

“My first thought was that this was wrong, but having interrogated the data further, I suspect many of the small adjustments may be due to more accurate mapping. If it is widespread that areas have been tweaked, this should have been communicated to the industry.”

Guy Smith, NFU vice-president, said it was “poor” that so few claim statements had been issued. Farmers also needed to see their pre-populated forms for 2016 as quickly as possible.

“The fear is that, if there are thousands of loose ends and errors to clear up, then there will be lots of additional work both for farmers and the RPA to get the 2016 application process up and running and on track,” he said.

An RPA spokeswoman said that it was possible to prepare and submit a 2016 BPS application without a claim statement. However, statements would be issued every week in batches.