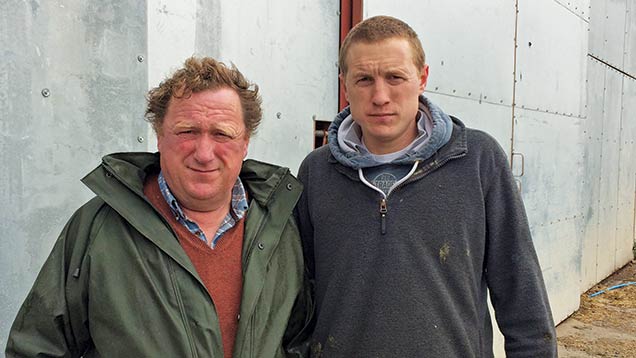 Glynne Jones and his son Elgan.

A Welsh livestock farmer who was wrongly docked 5% of his single farm payment for failing to comply with nitrate-vulnerable zone (NVZ) rules is demanding an apology after his own research established the zone no longer exists.

Glynne Jones lost £5,000 in penalties on his 400ha farm at Hafodty Ddu, near Saron, Denbigh.

A cross-compliance inspector advised Mr Jones that about 6ha of his land fell within an NVZ and 5% of his payments would be deducted because he had failed to keep records of how much fertiliser and manure had been applied.

A penalty was also applied to his Glastir payment. He was warned he could be prosecuted if he repeated the oversight.

But, through his own research, Mr Jones has now discovered that the NVZ ceased to exist in 2011.

“The stress this whole affair has put me through has been ridiculous. I was made to feel like a criminal,’’ said Mr Jones. “It is an absolute disgrace what has happened. I want an apology, someone needs to be accountable.’’

Although he was told by an officer at the Welsh government office in Caernarfon that the money will be reimbursed, together with the money he has spent on employing someone to keep records of his nutrient applications, he is upset it is down to him to initiate proceedings to recover that cash.

“I’ve been told that I must send a letter to the ministry offices in Llandrindod. I don’t think it should be up to me to send a letter. They know a mistake has been made – they should put it right,’’ he said.

The reason for the mistake, Mr Jones was told, was “human error”, but he makes the point that farmers who have inaccuracies on their Single Application Forms for the same reason face financial penalties with no opportunity to rectify mistakes.

He questioned if other farmers could be in a similar situation. “It makes you wonder whether NVZ maps haven’t been updated or if the ministry are using old maps.’’

A Welsh government spokesperson said it would be inappropriate for the government to comment on individual cases, but added: “We are looking into this matter and will provide a response to the claimant concerned once investigations have been finalised.”