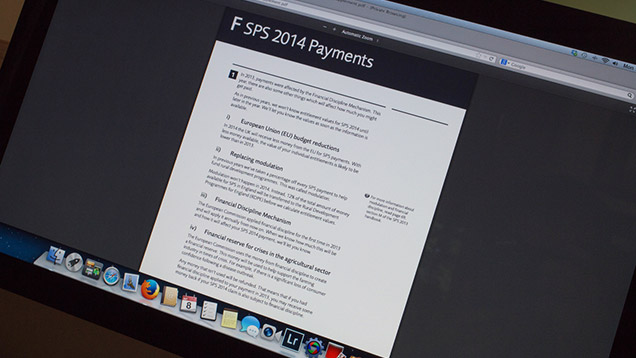 Farmers in England have just one day left to download any information they need from the old online Single Farm Payment system.

The Rural Payments Agency (RPA) has confirmed the SPS online system, known as Rita, will not be available after 31 March 2015.

This means farmers have only hours left to save or print off any copies of previous entitlement statements and SPS applications that they might need for their records.

Farmers and keepers who access other online services, such as the Cattle Tracing System, via the Government Gateway, will be able to continue to do so in the normal way.

An RPA spokesman said everyone who had used the SPS Online system in the past should have received a reminder that it would be unavailable after 31 March 2015.

Earlier this month, paper copies of 2014 entitlement and claim statements had also been posted to applicants, he added.

The closure of the old system for processing online claims comes just days after the RPA was forced to admit that plans for online applications in 2015 had been ditched.

Problems with new Basic Payment Scheme (BPS) online application system have proved so bad that the agency has told farmers that while they still need to register online, they must submit their actual 2015 claim in paper form.

The RPA has also extended the deadline for BPS applications from 15 May to 15 June.