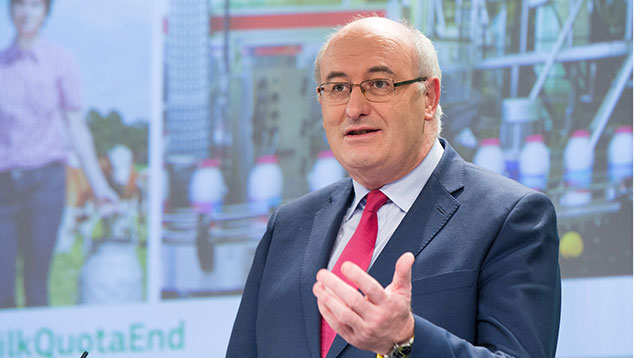 Farming unions have given a lukewarm response to steps by the European Commission to simplify the CAP, warning that the overall approach “lacks ambition”.

EU agriculture ministers agreed a list of priority actions that could help ease the burden of the new Basic Payment Scheme (BPS) rules for 2015 at a meeting in Brussels on Monday (11 May).

Writing on his blog, commissioner Hogan said: “Having listened carefully to the views of farmers, ministers and MEPs, I unveiled a number of ‪ measures to make the lives of farmers and national administrations easier.

“Among such measures I detailed that member states will only have to map declared ecological focus areas (EFAs) and that I am ready to allow flexibility in identification of EFAs in EFA layer (hedges, or wooded strips or trees in line).

“In an effort to make life easier for farmers, I’m also ready to allow hedges/wooded strips with gaps of up to 4m.”

Commissioner Hogan said these changes were being introduced with “immediate effect”. They were announced as part of six “concrete changes” to the CAP, which “should facilitate the lives of farmers and national organisations”.

These changes include a “simplified approach” as regards identification of some specific types of permanent grassland in the Land Parcel Identification System (LPIS).

Pure leguminous crops, such as alfalfa, should not be considered as permanent grassland, the commissioner said.

In addition, the period of declaration of land lying fallow as EFA and the period under agri-environmental commitments will not be taken into account for the calculation of the five-year period for permanent grassland.

Commissioner Hogan also unveiled plans to bring forward a second package of proposed measures after this summer for claims from next year, or possibly 2017.

These cover elements other than the greening, such as the young farmers scheme, voluntary coupled support and certain aspects of the Integrated Administration and Control System.

Gail Soutar, NFU chief economics and international affairs adviser, said there was an “urgent need” to simplify the CAP rules.

“The concrete measures presented by commissioner Hogan to apply for the 2015 claim will provide some limited flexibility for farmers,” Ms Soutar added.

“These include providing greater clarity on EFA mapping requirements and the position EU auditors will take in assessing compliance. However the overall level of clear ambition falls short of our expectations with respect to implementation in the first year.”

NFU Scotland chief executive Scott Walker added: “For Scotland we need a further package of simplification actions to cover not just greening, but also the voluntary coupled support schemes, aspects of the administration and control system, cross-compliance requirements and penalties, and for changes to be in place as quickly as possible.”