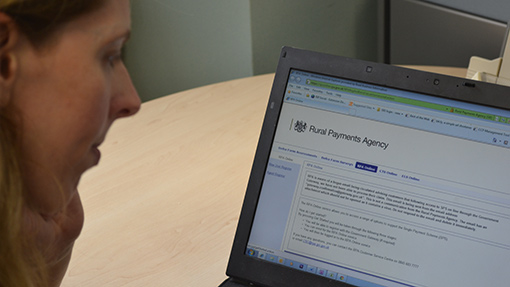 The NFU has demanded an investigation into IT problems that have hampered England’s farmers’ efforts to complete their Single Payment Scheme application forms.

The Rural Payments Agency was forced to take the SPS Online service down for several hours on Tuesday (6 May) after farmers and agents complained about problems during the bank holiday weekend.

In a tweet on Tuesday afternoon the RPA apologised for the problems and said thousands of farmers had managed to complete their forms over the weekend.

However, it added that it had decided to take the system down for a few hours to try to fix the problems users had experienced.

Later in the afternoon it reported: “The system is back up and running now. We do apologise for the inconvenience this intermittent issue has caused.”

Glitches in the SPS Online system were first noticed around Easter, with farmers and land agents reporting problems with logging into the system. More problems were reported towards the end of last week, which the RPA referred to as “intermittent”.

Richard Wordsworth, NFU SPS adviser, said he had fielded “a lot of calls” from members who were feeling extremely frustrated, with the 15 May application deadline fast approaching.

He urged farmers who were facing difficulties to complete a paper form if they had one available to them and to get it in the post so it reached the RPA by the deadline.

This year, the option to take forms direct to drop-in centres has been removed, but the union has raised the idea of opening drop-in centres to allow people to deliver paper forms right up to 15 May, he said.

“If people have to post them the last day they probably want to get them into the post is Monday or Tuesday of next week – so that has lost people two or three days’ contingency. Opening up drop-in centres could take the heat out of the situation for those who can’t get online.”

Mr Wordsworth said the NFU also wanted clarity about the penalties for late submissions. “The RPA could be more open about explaining what is going on,” he added.

The timing of the computer problems is unfortunate for the RPA, as it is actively pushing for more people to apply for their single farm payment online.

Its vision is that from 2015 all forms will be submitted digitally.

Mr Wordsworth said given this intent the timing of the IT glitches was “really unfortunate”.

The union wanted to see an investigation into what had caused the problems and a contingency put in place for next year, when there would be no paper forms to fall back on, he said.

“How can things be done better given next year 95,000-100,000 claimants are going to be online and using new technology. Lessons must be learned.”