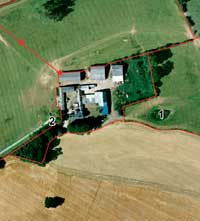 Thousands of farmers in England have received new maps from the Rural Payments Agency as it updates it Rural Land Register – but some are growing anxious.

WHAT’S ALL THIS AGAIN?

The RPA is updating its Rural Land Register – effectively the definitive map of who is farming what in England.

The map doesn’t record land ownership, only the farmed land that qualifies for single payment scheme money and who claims it. The RPA is required to update its maps to meet a challenge from the EU Commission.

WHY DO THEY HAVE TO DO THIS NOW?

The RPA has only had a narrow window in which to complete this project. Work began in June with this first maps being sent out to farmers. The RPA has to complete the project by December so it can use the updated RLR mapping information to pre-populate next year’s SFP claim forms.

BUT I THOUGHT WE’D DONE ALL THIS?

The RLR was updated in 2005, but needs to be done again taking into account Positional Accuracy Improvements (Ordnance Survey mapping software) and Real World Change, which is, well, physical changes on the ground since then.

Also, the new RLR maps will include the latest Ordnance Survey base layer.

Since the RPA began its mapping update in June, it has made two significant changes.

A glitch in processing the first 17,000 maps meant many changes to National Grid reference numbers: The RPA now says this has been corrected and later batches of maps will mean fewer of these corrections.

The RPA has aso decided to include boundaries declared in the 2005 mapping update, even where they are unclear. These disputed boundaries, where previous information indicates a boundary but where OS mapping and aerial photography can’t find one, will be marked with a series of stars. These need clarifying and agreeing with the RPA.

Farmers who have still not received their maps will probably have boundaries, marked with stars, that they need to clarify for the RPA.

No. The work of updating the RLR and processing the 2009 SPS payments is handled by two separate teams.

RPA chief executive Tony Cooper has said the organisation is ahead of schedule and almost 70,000 farmers will receive their payments this December.

Potentially, yes. The information on the updated Rural Land Register will be used as the basis for 2010 single payment claims – and the SP5 form will arrive pre-populated. So it’s important to make sure maps are accurate. Future RPA services will also use this information, so this is the chance to make sure the RPA knows exactly what you’re claiming on.

I STILL HAVEN’T RECEIVED MY MAPS

The RPA reckons there are about 20,000 still to go out, and if you haven’t received yours by now, it’s likely they have been edited to identify unclear boundaries with the new “star” symbols.

SHOULD I BE WORRIED?

However, the RPA is emphasising the importance of returning them within the 28-day window.

WHAT ABOUT THESE “INELIGIBLE FEATURES”?

The updated maps seek to identify “ineligible features” – ponds, metalled tracks, and buildings on which SPS cannot be claimed.

The RPA says some farmers have been reluctant to declare these features as they fear it may preclude them from claiming stewardship payments on ponds or woodland parcels – but the RPA says this is not the case. “They will appear as ineligible features on the updated maps,” says policy manager Simon Lunniss. “But that’s only for single payment purposes.

“The same applies to traditional farm buildings which are part of a modern yard or steading – as long as these features are on the Farm Environmental Record they can still attract points under stewardship schemes.”

WHAT WILL THE RPA SEND ME?

WHERE CAN I GET HELP?