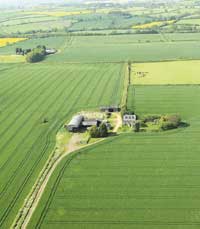 Complaints over the Rural Payments Agency’s latest mapping fiasco are continuing to roll in, despite the organisation’s claims it is working hard to rectify errors.

Farmers from across England have contacted Farmers Weekly to share their map inaccuracies, with one farmer finding his field size had increased by more than 1230%.


Writing on the FWi forums, one angry farmer branded the RPA as “complete idiots”.

“The maps are 50% wrong,” he said. “All fields without hedge boundaries have all been lumped together, with inaccurate areas.

“One 13ha field has been increased to 173ha which is our neighbours’. A new industrial area we developed two years is not even shown and 3ha park area has been included.

“The whole exercise is going to cost me money to get put right professionally – the RPA should be made to pay for its mistakes.”

Gator 152249 said his farm had more than doubled in size on his new maps.

“You would think they would have the common sense to look at a discrepancy of this size before even sending the maps,” he said.

“It also looks like being a costly problem to solve as, when I phoned them, I was told that if the boundary involved another farmer the measurements would have to agree exactly otherwise they would be rejected.

“The lady specified that the only way to ensure this did not happen would be to employ a surveyor.”

RobertBunting1 said his land was covered across 10 pages of maps, of which nine were incorrect,

“The best one for me is a 6ha field divided into three parts, each part still 6ha,” he said.

“All have now been returned for correction, but I suspect they will come back with faults and will need correcting again, probably 2 or 3 times.”

The complaints followed assurances from the RPA and DEFRA that they were working hard to put problems right.

Food and farming minister Jim Fitzpatrick said he was meeting RPA chief executive Tony Cooper every week to ensure 2009 single farm payments were not delayed because of mapping mistakes.

Farmers have been encouraged to check their maps and return them as soon as they received them.

Farmers and landowners across the south-west of England will be the next to be sent their maps as part of the RPA’s planned roll-out.


Found errors in your maps? Let us know in the FWi forums.