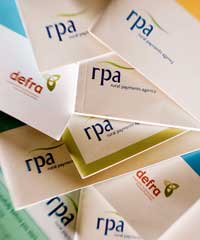 The Rural Payments Agency is ‘not well run’ and needs radical improvement to offer a better service to farmers, according to an independent review.

The review, which was announced by DEFRA in September 2009, considered the current state of the Rural Payments Agency as well as its readiness for a changed CAP after 2013.

It concluded that the organisation was ‘stuck in the past’ and needed a radical overhaul.

But it added: “There is no reason to believe that a scrapping of RPA with a complete new start would produce a fit for purpose organisation any faster or at any lower cost to the public purse.”

The review’s key findings were that the RPA’s finance functions and controls needed to be strengthened and a better quality of customers service should be provided.

It also said there was a lack of appropriate governance and oversight from within RPA leadership and DEFRA.

DEFRA minister Jim Paice said there were tough messages for both DEFRA and the RPA from the review and some tough decisions would need to be made.

“There is a lot of change ahead, but in implementing that change my top priority will be to maintain front line operations and levels of service to the agency’s customers.”