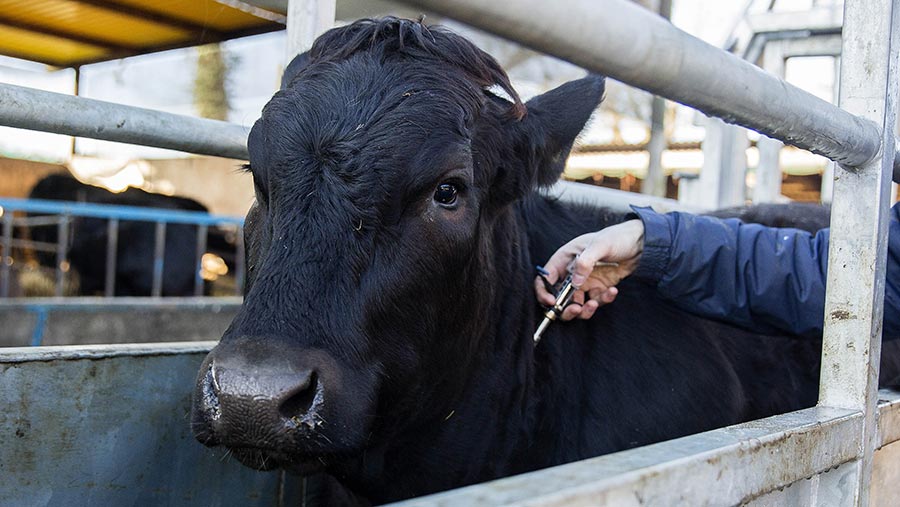 A cow being tested for TB © David Hartley/REX/Shutterstock

A farmer whose son was knocked unconscious and needed hospital treatment after being hit by an agitated steer during a TB test, says he would have risked losing up to 5% of his Basic Payment had the test been abandoned.

Seimon Walters, aged 26, was rushed to hospital by ambulance after the incident at Esgairhir Uchaf, near Carmarthen.

The test continued after a second vet and additional helpers were drafted in.

Under rules introduced in January 2015, Mr Walters would have been in danger of losing a percentage of his Basic Payment if the test had not been completed that day.

Mr Walters, TB spokesman for the Farmers’ Union of Wales (FUW), said the Welsh government needed to be more sympathetic to appeals lodged by farmers against financial penalties imposed for late testing.

The dangers of testing cattle have been highlighted by a number of fatalities on UK farms.

In January 2013, a dairy farmer from Carmarthenshire died after being crushed by a bull during a TB test, and later that year another dairy farmer died in similar circumstances in Shropshire.

According to the FUW, the cross-compliance penalty regime adds significantly to the health and safety risks of testing cattle.

The union’s head of policy, Nick Fenwick, said: “We have had several members who have been injured during testing, some quite badly.

“But if the farmer stops that test, then it could have massive financial implications for that business.”

Under the regulations, all tests which are more than 30 days overdue are subject to a 5% penalty, which the FUW says puts farmers in a situation where they can either risk health and safety, or incur a financial penalty.

In a statement, the Welsh government said EU rules allowed some discretion to take account of “exceptional or unforeseen circumstances”.

A government spokesman said: “Cases are considered on their individual circumstances by the Welsh government and the Animal and Plant Health Agency [APHA] prior to being referred to Rural Payments Wales.

“Farmers should inform APHA of any event within 15 days of being in a position to do so.

“As with all decisions relating to CAP payments, appeals and complaints can be made regarding the way a claim for payment has been handled.”

But Dr Fenwick said past attempts by the FUW to appeal such cross-compliance penalties had been dismissed.