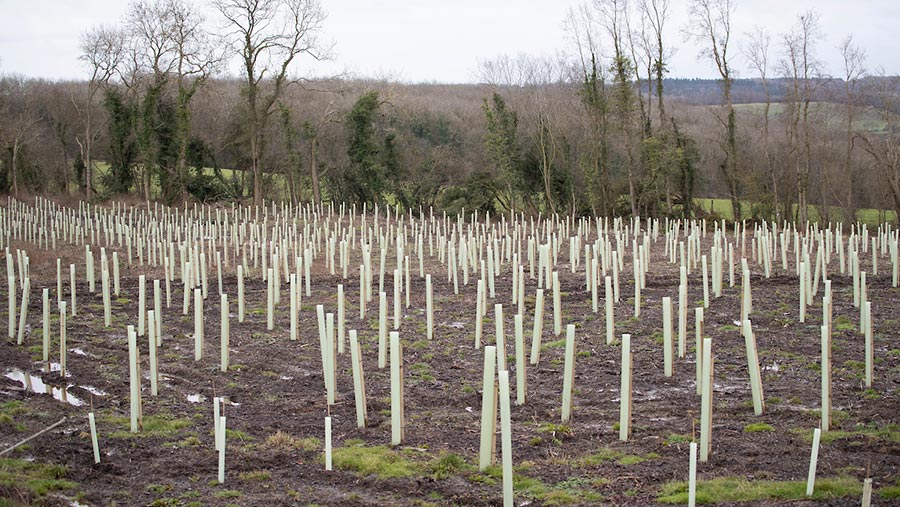 Scotland has launched a new loan scheme to support small-scale woodland creation projects by helping farmers with some of the upfront costs associated with tree planting.

Under the Small Woodlands Loan Scheme, half of the costs associated with planting a new woodland, including buying trees, ground preparation or fencing, can now be paid in advance by Scottish Forestry.

The aim is to remove any cashflow barriers that crofters and farmers might have when considering tree planting.

See also: Ultimate guide: How to plant trees on your farm

The new loan works alongside the existing main Forestry Grant Scheme (FGS) and is targeted at woodland creation projects up to 20ha in size.

Land managers making an FGS application for up to 50ha can apply for the scheme, but the loan will equate to 50% of the cost on 20ha of the application.

The 50% advance payment is directly linked to the “capital grant operations”, which each individual applicant will have detailed in their FGS contract.

Farmers can apply for the loan by “opting in” on the appropriate section within the Woodland Creation Operational Plan, which is a mandatory supporting document when creating and submitting an FGS woodland creation application.

The payment will be provided once the applicant has an approved FGS woodland creation contract and associated loan agreement in place.

Rural economy secretary Fergus Ewing said the scheme had been introduced in recognition of significant interest in smaller tree planting projects from land managers who were worried about the costs.

At the moment, almost 200 of the 320 woodland creation schemes being funded by Scottish Forestry are for smaller projects.

“This new funding arrangement should give further confidence to the smaller businesses who want to get trees in the ground and help us deliver future planting targets,” said Mr Ewing.

A £22m fund is also available for farmers and land managers across Scotland who want to undertake peatland restoration projects.

As well as offering funding for smaller projects, the 2021 funding round has been expanded to accommodate large-scale schemes over multiple years.

Applications can be made at any point up to midnight on 30 September through NatureScot’s Peatland Action programme or though the relevant National Park Authority if located in one of Scotland’s national parks.

Peat soils cover almost a quarter of Scotland, about 1.7m hectares, but it is estimated that more than 80% of Scottish peatlands are in poor condition, and instead of capturing and storing carbon, they release it into the atmosphere.