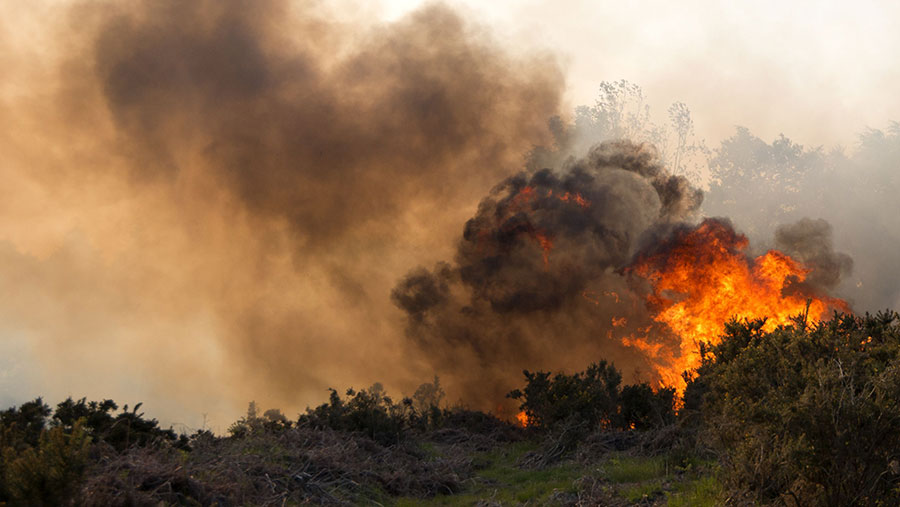 With gorse fires reported in parts of Northern Ireland as the hot, dry spell continues, farmers are being advised to notify authorities immediately of any land affected, or risk facing penalties to their support payments.

One particular gorse fire has been raging at Glenshane Pass in the Sperrins, County Londonderry this week, and is estimated to have destroyed about 1,000ha of moorland.

If fire does strike, the Department of Agriculture Environment and Rural Affairs (Daera) says farmers need to take the right actions now to safeguard their payments under the Basic Payments Scheme and other area-based schemes.

“EU rules only allow payment on land that is eligible, therefore, if you have been affected by a gorse fire, you should apply to Daera within 15 working days of the fire, or when the farm business is in a position to do so, for consideration for force majeure,” said a spokesman.

“You will have to demonstrate that land has become ineligible as a result of a gorse fire and that the circumstances of the fire were unforeseen.”

Affected farmers are advised to immediately contact the area-based schemes payment branch on 0300 200 7848 and then complete an FML1 application form, available on the Daera website.

Further information is contained in the Guide to the Basic Payments Scheme 2018 [PDF], starting on p62.

Each request will be assessed individually, to confirm the fire prevented the claimant from meeting all obligations under the scheme in question, including the need for land to be in agricultural production.

“It is important that farmers detail all the facts, including where and when the fire started and when the incident was reported to the police or the Fire and Rescue Service,” said the spokesman.

“Telling us now will allow us to help ensure that farmers do not lose money unnecessarily.”

Controlled burning would be preferable

The Ulster Farmers Union (UFU) has complained that limiting the extent to which farmers can carry out controlled burns in certain areas may have made the situation worse.

“Especially in the hills, increasing restrictions on controlled burns to manage heather and gorse means there is a greater risk of a wildfire in dry conditions,” said UFU hill farming chairman, John Kennedy.

“Going forward, government should be supporting farmers to carry out controlled burns at the right time of year within habitats that are at risk of wildfire,” he added.

“It is a practice that has been around for many generations and helps to keep vegetation under control.”