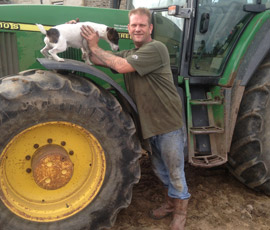 From fishing and firewood to camping and camels – you name it and farmers have diversified into it. But Chris Moss might just have a unique claim to fame with his particular brand of diversification.

The son of Teesdale farmer Peter Moss, Chris grew up helping his father on the farm and with his agricultural contracting business. But after the foot-and-mouth outbreak, a number of farms in the area used government compensation to set up in competition. Suddenly there wasn’t enough work to sustain him in the business and Chris found himself jobless.

“I got a bit depressed and was feeling a bit sorry for myself so I thought I’d get a tattoo to cheer myself up,” explained Chris, who got his first tattoo during a stint in the army as a Royal Engineer.

It was during his visit to the tattoo studio that he met Anthony Edwards – a tattooist who would later become Chris’ teacher and mentor.

“I overheard a conversation where Anthony said he was a keen hunter, but no one would let him on their land to shoot because he was heavily tattooed. My father’s land was overrun with rabbits, so I offered to take him shooting.”

By way of saying thank you, Anthony handed over a tattoo gun and let Chris tattoo him.

It turned out Chris had a flair for it, and just three months later he was working in Anthony’s studio.

“The tattoo studio pays the bills and, because we’re not so dependent on the income of the farm, it has allowed me to create a new footprint for the tenancy.”
Chris Moss

In 2006 Chris took his new career a step further when he set up his own tattoo studio. Three members of self-employed staff run the studio when Chris is out working on the farm or helping with his father’s sheep flock. The rest of the time Chris inks customers himself, and requests are varied to say the least.

“You definitely get tattoo trends,” he says. “A few years ago it was stars – I’ve probably tattooed as many stars as you can see twinkling in the sky. More recently it’s been outlines of birds flying. It’s a bit like marking sheep – it shows which gang people are in.”

Speaking of sheep, it’s not unheard of for Chris to put his agricultural knowledge to use in the tattoo studio.

In the past he has been asked to ink an image of a customer’s prize tup, a duck breeder’s best duck, and once had a customer travel all the way from Newcastle to a tattoo convention in Bournemouth to have Chris tattoo a picture of his grandfather’s horse-drawn plough onto his back.

“I love doing nature tattoos. I’m in a very privileged position to see a lot of these things first hand, so I love recreating the realism of nature by doing things like portraits of animals.”

Chris admits that there is still a stigma in society attached to tattoos, but his own rural community is generally very open-minded, not least his wife Colleen. Chris has inked all of Colleen’s tattoos and describes her as his “ultimate canvas”.

Aside from his love of the job, Chris’s job as a tattooist is also helping to shape the future of his new farm tenancy. With help from agents at George F White, Chris secured the 24ha plot of woodland and meadowland against competition from more than 20 other interested parties. The land lends itself to haymaking, but he has big plans for his tenancy, which forms part of the Bowes and Romaldkirk charity estate.

“The tattoo studio pays the bills and, because we’re not so dependent on the income of the farm, it has allowed me to create a new footprint for the tenancy. I can think outside the box and focus more on conservation. For example, I want to restore hardwood trees to the valley.”

And his long term hopes for his tattoo business?

“My lifelong dream is to tattoo prince Harry, or any royal,” he says. “If I could have ‘By appointment to the Queen’ above the door to K2 Body Art I’d be a happy man.”