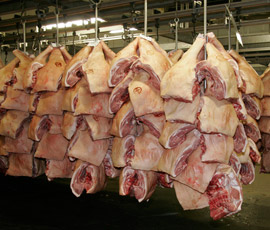 Over the same period ex-farm feed wheat prices have fallen from £200/t to about £160/t.

But the rise of the DAPP may soon level out as spot and contract prices have started to ease back. Rising availability of imported pigmeat and recent price falls in the influential German market are to blame for this.

The latest British Pig Executive (BPEX) figures put average UK production costs in June at just over 164p/kg, compared with 173p/kg for January with much higher feed ingredient costs accounting for the difference.

Now that finishers can see better margins on lower feed costs, weaner prices have continued to rise although any further falls in finished pig prices could undermine this improvement.

The latest Agricultural and Horticultural Development Board 30kg ex-farm weaner price at £53.23 a head compares with £46.21 a head at the start of the year.

Slaughtering figures from DEFRA show the UK clean pig kill in May stood at 740,000 head, 2% down on the same month last year, and pigmeat production was also 1.6% lower.

Sainsbury’s recently announced that all of its fresh pork will be British, as consumers remain sceptical about British food safety since the horsemeat scandal at the start of the year.

Only 40% of adults trust supermarkets and food manufacturers to provide accurate labelling on food packaging, according to a recent Mintel survey, but 50% trust the food industry to provide them with a safe product to eat.

Keep up with the latest agricutural business news