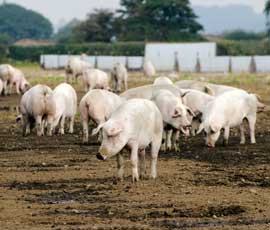 Finished pig prices are at their highest level since the BSE crisis hit the UK livestock industry in 1996, although this is before accounting for inflation. The Deadweight Adjusted Pig Price (DAPP) has risen by a further 1.24p/kg and now stands at (164.03p/kg) compared with its value of 148.39p a year ago.

A further increase of 4-8p/kg will be needed to put producers back into the black; the latest costings produced by BPEX for April 2013 show the UK cost of production figure at 168p/kg dw, which is still well ahead of average producer returns.

BPEX is also estimating a 4% fall in UK slaughter pig output for this year following an exceptionally cold and wet winter. This hit outdoor herd output particularly hard and this system of production now accounts for an estimated 40% of the whole UK breeding pig system.

Not only has piglet mortality been higher but service and farrowing rates have been adversely affected, not to mention a hike in straw use and costs.

Consumers spent 4% more on pork in the 12-week period leading up to mid-April, but volumes fell by 2%.

Following the horsemeat scandal, demand has continued to improve for Red Tractor and Freedom Food Farm Assured pigmeat from known sources. Significant premiums are now on offer as far as high welfare pigmeat production is concerned.

Demand for Freedom Food standard pigs is outstripping supply and producers may be able to achieve a price of DAPP plus 8-10p/kg in upcoming contract negotiations.

European pigmeat prices remain under pressure due to high storage stocks and indifferent demand, with the result that average producer prices paid in the big six producer countries are some 30p/kg below Red Tractor returns in the UK.

As a result, meat wholesalers are now able to source imported pigmeat at 20-25p/kg below equivalent UK prices for standard indoor bred pigs hitting demand for the UK product and widening the gap between Freedom Food and non-Freedom Food producer returns.

Without further investment, UK pig production costs will continue to exceed those of producers throughout much of mainland Europe.

Many breeding and finishing units were built or updated 30-40 years ago and need refurbishment or replacement to provide efficient and productive accommodation.

Banks will normally require security of between one-and-a-half and twice the amount being borrowed and in many cases will not accept livestock or machinery as security but will require freehold assets.

Arrangement fees will also be required and can vary between 1% and 1.25% of the overdraft or loan.

With many producers operating their business on overdraft, alternative sources of finance may be hard to find.

Bank interest overdraft rates for most farms are from 2% above the Bank of England base rate of 0.5% and in many cases total annual borrowing costs can be up to 6%, especially if these are in the form of a business loan for expansion rather than added to existing overdrafts.

Producers approaching their banks must prepare a business plan and cashflow with budgets and establish clearly what will be charged by banks in set-up costs. They also need to ensure appropriate repayment periods, which for capital projects ideally should be 10 years or longer.

With base rates at historical lows, where possible producers should consider locking into fixed rather than variable interest rates to reduce risk if rates rise in the future, although this will come at a 2-3% premium compared with current variable rates.

The announcement of new permitted development rights allowing existing agricultural buildings up to a total of 5,000sq m of floor space to be used for a variety of commercial uses (excluding housing) may also provide producers with an opportunity to diversify their existing outdated buildings and to reinvest the income in new pig facilities elsewhere on their holdings.

Finishers producing bacon pigs on contract for large-scale third-party companies should also consider joint investment arrangements under which the pig supplier also provides long-term finance to be repaid over (say) a 10-year term as an alternative source of finance.

In all cases, however, producers should look at the potential alternative use of any new or refurbished buildings for storage or commercial use if pig production is no longer profitable.

Steel portal framed straw-based buildings should be considered rather than low profile specialist pig production accommodation, which has little alternative use potential.