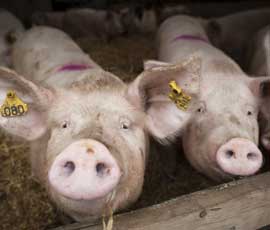 Pig production costs fell by 1p/kg in August, as spot feed prices eased. According to a report by BPEX, costs of production averaged 157.1p – almost 13p/kg down on the year.

“With pig prices currently around 168p/kg, this means that producers will have a cash profit of over £8 a pig during the month,” said the report. “However, while the estimate reflects current feed prices, pigs entering the supply chain now were fed on expensive feed bought when prices were higher. As a result, the likelihood is that many farmers are not yet breaking even on the pigs that they are selling this month.”

Although weaner prices had edged up slightly to £53.66 a head, a further weakening in the deadweight average pig price, to 167.72p/kg in the week to 24 August, was testing producers’ confidence, said the report. “Despite prospects for a better feed market, the easing in finished pig prices has meant that finishers are unwilling to increase the price they pay, for now at least.”

In contrast, cull sow prices, buoyed by the strong German market, jumped for the 12th consecutive week, to 121.44p/kg in the week ended 17 August.