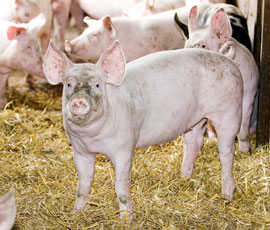 There is still a wide gap between pig prices and costs of production, despite improvements.

The GB EU Deadweight Adjusted Pig Price has risen by 8p/kg since early July to 158p/kg dw in the week to 20 October. Over the same period, weekly contract and spot prices have risen by a similar margin.

According to BPEX, breeder-finishers need a minimum of 170p/kg dw to break even. At current levels, net returns are still on average about 10p/kg adrift of this, which is equivalent to a loss of £7-10 on every pig produced.

Reports on forward availability of cereals flag up further reductions in output levels. The latest figures from the US Department of Agriculture downgraded estimates for global grain production for maize, wheat and soya beans.

There are forecasts of lower end-of-season stocks, and problems in Ukraine and throughout the UK as well as in Europe due to the very wet weather. Some cereal producers will have to switch to spring- rather than autumn-drilled crops leading to further yield reductions next harvest.

The only relief in connection with feed costs has been an easing in the HiPro soya price which is now quoted at around £400/t.

Unless weaner prices improve significantly in the months ahead, producers in this sector will also be facing significant losses, with the latest Agriculture and Horticultural Development Board 30kg ex-farm weaner average quoted at £42.29 a head compared with a cost of production of more than £46 a head.

European pigmeat prices have also eased back from September levels with poor demand pushing the EU mainland producer price down by almost 4p/kg over the past three weeks.

This will reduce the value of pigmeat imported from the EU mainland, although a recent slight improvement in the euro rate, which traded midweek at 81p, may help to bring some stability.

Pressure on continental European pig prices, which have fallen 4p/kg in past three weeks

Unless European pig prices rally before the end of 2012, UK pig prices set to remain at current or slightly lower levels until late February/early March 2013

Weaner market still £4 a head lower than cost of production

In any event, producers will be facing tough financial challenges over the winter period, when feed costs tend to rise and straw usage rates go up.

Unless European pig prices stage a rally before the end of the year, the prospects are that UK pig prices are likely to remain at current or slightly lower levels until late February/early March 2013.

The stall and tether ban is set to become law on the EU mainland from 1 January 2013. By that time, the effects of this may start to be felt, leading to a reduction in European slaughter pig availability. However this needs to be coupled with a better consumer demand.

UK pig producers are in many cases hitting their overdraft limits. Some may find their banks unwilling to extend existing overdraft facilities unless these are secured against non-pig assets such as arable land and property.

Although feed credit provided by compounders may help to ease the strain, this comes at a price as it effectively removes the producer’s ability to negotiate lower feed prices or to switch suppliers if their feed credit is at high levels.

Scottish pig producers are also facing the problem of the upcoming closure of the Vion Broxburn plant, which employs 1,700 people and processes an estimated 70% of Scottish pigmeat.

Although the exact date of the closure of the plant has yet to be finalised, this will be not later than February 2013 unless acceptable bids are received.

The Scottish pig herd currently stands at about 35,000 sows, of which between 25% and 30% are owned by Vion. If Broxburn closes, it is likely that the output from the Vion herds may be sent to the firm’s Malton factory in North Yorkshire.

Tulip’s involvement in the St Jess Brechin abattoir should lead to increased kill levels and other Scottish abattoir operators are also looking at upping their pig kills because of the need to avoid the high livestock haulage costs involved in taking pigs for slaughter south of the border.

This will also allow Scottish producers to retain and market their own unique “Scottish produced and processed” product rather than see further shrinkage in this sector.