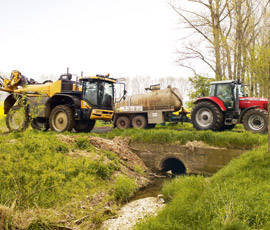 Farmers have been given the green light to maintain watercourses to reduce rural flooding – but only in certain areas and subject to strict conditions.

From September, farmers in six pilot catchment areas will be allowed to take flood management action for a year. The six areas comprise two catchments in south west England, one in the upper Thames catchment, one in East Yorkshire, one in Shropshire and one in Lancashire.

Riparian landowners – those who own land or property next to a river, stream or ditch – in the six pilot areas will be able to desilt man-made ditches, drains and previously dredged watercourses less than 2m wide, as well as up to 1500m of watercourses wider than 2m.

Other permitted activities will see riparian owners allowed to clear sediment or debris from inside culverts. In a further move to relieve flooding problems, desilting will be allowed 10m upstream or downstream of structures such as a bridges, culverts or outfalls.

It follows complaints that rivers and watercourses have been neglected due to Environment Agency budget cuts. As a result, farmland has flooded – often lying under water for weeks and months on end at significant cost to growers and livestock producers.

The move represents a victory for the NFU, which has spent months lobbying DEFRA ministers so farmers can maintain watercourses without seeking agency permission. Conservation bodies and anglers’ associations have argued against the decision, saying it will be bad for fish and wildlife.

NFU head of policy Andrew Clark said he was confident watercourse maintenance could be carried out without a detrimental affect on wildlife. But it would in no way replace the government’s gross underfunding for flood maintenance, he told an NFU Council meeting on Tuesday (25 June).

“This is just a small contribution to sorting out the problem,” said Mr Clark. “We are talking about smallscale bankside maintenance and dredging around culverts and that sort of thing to relieve blockages in the watercourse that are causing real problems.”

Strict conditions will be attached to flood management measures in the pilot areas. Dredging will remain banned inside environmentally protected sites, such as SSSIs. Farmers must also avoid causing increasing flooding upstream and downstream from the maintained area.

Maintenance must avoid disturbing protected wildlife species, including salmon and sea trout during the breeding season. Farmers must also ensure they have appropriate waste exemptions before they embark on watercourse maintenance.