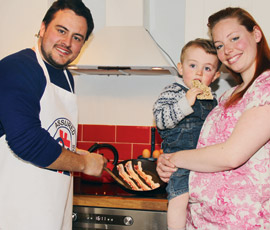 James and Emily Bradshaw, from Westerham in Kent, made national news after committing at the start of this year to use only British goods and services.

The couple, along with their two and a half year old son Lucan, were inspired to take on the challenge by the tax scandals at the end of last year when companies such as Amazon and Starbucks were found to have paid little or no tax in recent years. After Mrs Bradshaw decided to buy Christmas presents from only British companies, Mr Bradshaw, who works in the City, wanted to take it a step further.

In January, the couple pledged to only use British goods and services, and set up a blog to document their challenge.

Within weeks, it was clear their lifestyle would have to change and, in order to complete the challenge, the family were forced to abandon supermarket shopping.

Supermarkets were not the best place for the family to shop, as working out where produce comes from was too difficult and time- consuming. “Supermarkets aren’t the way forward [for local food],” says Mrs Bradshaw, a teacher.

However, some are better than others, and the couple still shop at supermarkets for non-food items.

“It really depends where you buy from,” says Mrs Bradshaw. “It’s very inconsistent. Waitrose, for example, is very good as the writing is clear and always in the same font, but other supermarkets are not so clear,” she says.

Searching packaging for tiny writing is the main problem, she adds.

Fresh fruit and veg tends to be better, while breads, cereals and other packets are less clear.

“Meat isn’t too bad, but meat counters can be difficult – especially as the staff often have to go away and find out,” she says. “Having the Red Tractor logo on packaged meat is a lifeline.”

“It’s definitely made better cooks of us.”
Emily Bradshaw

The Bradshaws believe the issue of labelling needs to be addressed by the industry as a whole, rather than by individual supermarkets, to ensure consistency.

After finding supermarket shopping a challenge, they turned to a box scheme, where their groceries are delivered from the local area, which allows complete traceability.

While many people would think having groceries delivered to your door would be more expensive, the grocery boxes have actually saved the family money.

Weekly, the family get fruit, vegetables, milk, eggs and bread in their box. Meat is delivered every two weeks and fish monthly, as these are freezable. Other than the quantity, they do not know what vegetables or cuts of meat they will be getting.

The grocery boxes are put together by Kent Veg Box, which sources all the produce from the local area. “They go direct to farmers, so when it arrives, the packaging is nothing fancy. The fish comes from Dungeness and we get it in plain bags with what it is written on.”

The meat comes from Monkshill Farm, an educational project run for deaf young people, which is also a successful working farm. The project gives young people careers and independence, and supporting this kind of project is not ordinarily available to a family through supermarkets, says Mrs Bradshaw. “It’s a win-win,” she adds.

“The meat we get now is so much better quality than from the supermarkets. When we first got the mince from the box we thought there was something wrong with it because it actually smelt of something when it was cooking. It turned out what we could smell was just steak.”

Mrs Bradshaw says it is important consumers find their local butchers. “People are not used to having a relationship and it would be nice to start that again,” she says.

This relationship allows the family to discuss what they would like more or less of with the grocery supplier when the box is delivered.

“We’ve always been grateful for what farmers do. They don’t have an easy job and there is always someone who will do it for less, so they’re undercut all the time. It has opened our eyes to difficulty farmers face.”

The horsemeat scandal from the past few months has highlighted what they are doing, they say. “It’s been good timing that we’re having a resurgence in people caring about food,” says Mrs Bradshaw.

The family have been unable to get a small number of things such as black pepper and batteries, but have found alternatives or are managing to do without.

It is difficult and they have to make changes to their routines, but when their challenge finishes at the end of this year a lot of these changes will be here to stay.

“It would be bonkers to go back to how we were before.”

Farmers Weekly will be catching up with the Bradshaws later in the year to find out how they are getting on.

Keep up with the latest farm business news