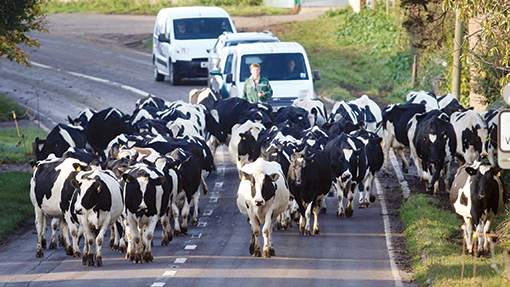 With little more than a year until EU milk quotas disappear, Charlie Taverner considers the outlook and how producers should be preparing for the change.

December’s milk production was the highest in 18 years, average dairy farm business incomes could hit £101,000 in 2013-14 and the farmgate milk price is holding steady.

But 13 months down the road lies the spectre of milk quota abolition on 1 April 2015.

However, with British production unlikely to explode after the quota is lifted, a well-managed farm should be able to thrive in the post-quota world.

Use the map below to see which countries were the biggest milk producers in the 2012-13 milk year. The darker the colour, the more litres produced.

Click on a country to compare the numbers of producers and cows, herd size and quota position last year. The fact box also includes the most recent farmgate milk price.

Farmers and processors will be working in an increasingly connected world market, where demand for dairy products is growing about 2.3% a year, driven particularly by China.

A rise in EU milk production appears inevitable and its upward trend has already resumed following a difficult 2012-13.

Northern Europe is the source of the big push: Ireland’s production was 19.7% higher for November, while Germany, the Netherlands and Denmark also enjoyed impressive increases, as they continue to push quota limits in anticipation of abolition.

Irish farmers, spurred on by a government plan to increase milk production by 50% by 2020, could be hit with a €30m superlevy for busting their quota by the end of the milk year.

While each of these countries has its own restrictions – such as processing capacity in Ireland, capital availability in Denmark and environmental rules in the Netherlands – if this trend continues, there are likely to be consequences.

“The European Commission have said there will be no more increase in production, but I think that is rather naive, because we already see it in Ireland, Holland and Germany,” said Nick Holt-Martyn, principal consultant at The Dairy Group.

“Any small percentage change in our supply will have a large effect on global markets and this is something we have not seen with quotas.”

The European Commission sees this as the greatest challenge, but it is not a new problem.

John Allen of Kite Consulting said Europe had faced volatility in the past, with prices sometimes doubling or halving over three years.

“I do not think the peaks and troughs will get larger,” he said. “I think there are more tools in the market now.

“The Global Dairy Trade auctions have helped a lot – they take quite a lot of volatility out of the market.

“You can look at the GDT markets with six months of fairly firm prices and it gives confidence to people.”

In the UK, the end of quotas could arrive with little more than a whimper. Production might be booming this year, but the UK has been under quota for years.

DairyCo estimated last week that British dairy farmers would have to produce 15% more milk than the average during the past five years to hit the 15.3bn-litre quota in 2014-15, beating the record of 14.1bn litres in 2003-04.

“We effectively have had no quota system in the UK, because we have not come close to hitting it,” said industry commentator Chris Walkland.

“It is not as if we’re like the Irish or Dutch, who have been holding back. It will be what happens to the market, and to what degree the EU will expand production and be able to export, that will depend on global demand and our relative price.”

While global demand remains strong, the new milk world is an exciting place for profitable producers, big or small.

“Where free markets have operated, looking at New Zealand and the States, what tends to happen is first you have a big growth in total output and this offers opportunities to all, but it has been on the back of a rise in the scale of operations,” said Mr Allen.

“I predict that we will see the same happening in Europe close to the removal of quotas. These will be family-operated farms, but just significantly larger.

“You could be a guy now who has a farm of 90-100 cows and if you are canny, you can grow. There are good opportunities for youngsters to grow, even from a small scale.”

In preparing for the post-quota world, the main steps farmers can take are familiar.

Keeping a close check on your cost of production becomes even more important when you are less sure about your returns from the global market.

“Be a least-cost producer so you benefit from high prices but are not reliant on them,” said NFU chief dairy adviser Rob Newbery.

“We have got higher prices now, so it is important farmers use that money to make businesses more efficient.

“Invest in skills, productive infrastructure and the kind of capital that does not depreciate as much.”

Processors are the farmers’ link to the global market and, as the situation develops, producers need to be savvy about the destination for their milk.

Dodd & Co accountant Rob Hitch said if farmers were keen to produce more they should speak to their processor first.

Adapting to the post-quota milk market

“Farmers will have to see if the buyer will have all the milk,” he said. “I think there will be far more focus on exactly how your contract operates in terms of volumes.

“Agree an expansion up front with processors rather than putting in cows and hoping someone will buy the milk.”

The choice of processor would remain important, said Mr Walkland, given that there is some uncertainty about the UK’s capacity to process increased output and companies with access to global markets were starting to offer competitive European prices to British farmers.

“It comes down to who you’re with. Which company can ride the volatility rollercoaster better than the others?”

As the UK opens up to the push and pull of international milk trade, farmers could also do with knowing what their competitors are up to.

“I think people need to be aware of industry-standard production costs in other parts of the world; they have got to have a handle on what milk costs to produce in New Zealand and the USA,” said Mr Hitch.

There should be no rush to sell quota before 1 April 2015, because it can be put down as a capital loss for 2014-15 and set against the tax bill on other capital gains.

Grant Hartman milks 375 cows on about 81ha just outside Carmarthen in south-west Wales. He is growing his business quickly while maximising profits and smoothing the risks of price volatility.

Mr Hartman believes a competitive European pricing structure will arrive even before the end of quotas, bringing with it bigger price highs and lows, making good planning even more important.

A Dairy Crest supplier, he sells 50% of the milk on the company’s formula contract, and his milk price for January works out at 33.511p/litre on average.

“We have got to get our business in line to cope with the volatility,” he said.“We are constantly buying feed forward. We buy both energy and protein and that has saved us a lot of money.

“I would say maximise your milk contract and make sure you hit every bonus that is going.”

His total production should hit about 4m litres this year, at an average yield of about 10,700 litres a cow.

Mr Hartman is a consultant for Kite, so employs several staff, including a herd manager and farm foreman to help run the farm.

To make this high-input system work, he installed a new 40×40 herringbone milking parlour in 2011, when he had 267 cows, and now wants to expand the farm to produce about 5m litres a year.

“We are aiming to be as efficient as possible,” Mr Hartman said. “We had quite high fixed costs, particularly labour, and this was a way to justify those costs.

“For example, if you have a herd manager, that salary goes out, whether you’re milking 200 cows or 300 cows.

“We have got everything in place now for 700 cows: the parlour is big enough, the slurry capacity is OK.

“To me this is a manageable level of expansion, because a part of that can be covered out of profits that you are generating.”

Danish farmer Søren Madsen is excited about the end of quotas.

An Arla co-op member, he milks 600 Jersey cows on his 400ha farm near Lundby, 45 minutes south of Copenhagen.

Denmark is pushing its production: the country was hit with a €5.1m superlevy for going over quota in 2012-13 and, in November, production was up 4.7% on the year before.

“We see it as a possibility for growth. In the past we have had to buy quota and right now it is quite expensive.”

Mr Madsen said he could increase production on his farm by 15-20%, but whether he did so would depend on milk prices and feed costs.

“In general, I would think Danish production could increase 10-15% in the next four or five years.

“Of course, it depends on the milk price and what we expect it to be after the quotas are lifted.”

Danish farmers have to deal with stringent environmental rules, such as how they can dispose of manure, how many tonnes they can spread a hectare and nitrogen evaporation from farm buildings.

“That will be the next limiting factor on our production,” Mr Madsen said. “We are a lot more restricted than average EU laws.”