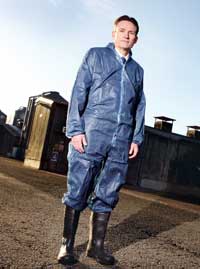 John Reed has been involved in the poultry industry for over 30 years, working on both the egg and meat sides of the business. He is also the new chairman of the British Poultry Council. Philip Clarke went to meet him

You took over as chairman of the British Poultry Council last September. What do you see as the biggest challenges?

• There are so many, but the current economic climate and the attendant cuts in government spending are right up there. This has many ramifications, with government looking to pass on all manner of costs to producers – meat hygiene charges and disease control costs being just two examples.

There is also huge concern that research and development will be further cut, while tax changes are diminishing the incentives for the sector to invest. Training, which until recently has enjoyed better government support, also looks in danger.

That’s quite a list, but what about the state of the market? That’s got to be another major worry.

• Absolutely. We’ve seen unprecedented volatility in commodity prices, energy costs and currency, but overall the trend is always up. These rising costs need to be reflected in the retail price, but there has been reluctance among the supermarkets to recognise and accept this cost increase. They seem to think that if they drag their feet long enough, costs will come back down again. But the current price is not sustainable, especially as the industry has to meet increasingly tough regulatory standards and invest in new technologies.

I realise that consumer spending is tight. But I believe that, even if they have to put the price up to consumers, chicken will still be a very attractive purchase.

What about the supermarkets’ stipulation that all poultry feed should be GM free?

• It is ludicrous that we still have this retailer requirement, for which there is no scientific rationale. It makes us less competitive and conflicts with the environmentalists’ aim of saving the rainforests. But I also believe that, as GM-free soya gets scarcer and the number of GM varieties grows, so the risk of contamination will increase, raising big, but unnecessary questions about the integrity of the food supply chain. Supermarkets should be asking if they really want this.

Poultry World said recently that the proposed new Partnership Board for cost and responsibility sharing had “all the hallmarks of a toothless talking shop”. Fair comment?

• I sat on the Radcliffe committee for over a year and our proposals call for a small Partnership Board of just 12 members – four from government and eight independents. If we had more than this, then it would be a talking shop. By keeping it small, the deliberations will be much more focused. And with independents outnumbering civil servants by two-to-one, DEFRA won’t be able to do just what it wants. We will have to have the right calibre of independents on the board to drive policy in the right direction and producers will be able to make nominations. I think the farming industry is underestimating the power it will have.

What about the financial aspects? Producers are being asked to sign up to something without knowing the cost.

• It was important that we got the idea of a disease levy removed as this would have been unfair to the poultry sector. It is also right that our proposals call for a full efficiency review to make sure we get value for money. And it is important we sort out the responsibility sharing aspects before we allocate any costs to industry. The previous government was trying to do it the other way round.

What plans do you have for the British Poultry Council?

• We have to keep the BPC relevant and improve the service it gives its membership. We are an inclusive organisation committed to serving all sectors and sizes within the poultrymeat industry.

We certainly need to work more closely with other industry organisations so that, where possible, we can speak with one voice. And we need to be more proactive on the PR front. We have a good story to tell about the contribution we make to food production. It depresses me that, every time poultry production gets mentioned on TV, they show a picture of a bird in a cage.

I’m also keen to develop the training side of things, so we can attract more young people into the sector.

How do you feel about opening your doors to the public?

• As an industry, we are getting better at this, though there are valid reasons why you have to be cautious. Yes, we do show people around our factory in Hereford. But at the end of the day, we are dealing with the slaughter of food animals and most people don’t want all the gory details.

The situation with farms is slightly different. It is important that producers engage with the influencers, though they must not compromise biosecurity. I think the key message to get across is about scale – that big is not necessarily bad. When you have scale, you can put the resources in to do the job better and we have to have efficient production to feed a growing population. I think the tide of public opinion is turning and we need to build on it.

On the subject of slaughter, what do you think about halal meat?

• We produce halal meat to differing standards which does cause confusion. Yes, it’s an important market, but I believe strongly that all animals should be stunned before they are slaughtered. Carry out the processing according to religious protocol by all means, but I struggle with the idea of killing a bird or animal without pre-stunning.

How do you see the poultry industry evolving in the next few years?

There is no doubt the market will continue to grow. It is currently worth £4bn at retail and we have seen 5% annual growth for each of the past five years. We are 90% self-sufficient in primary chicken and that is growing. Within the retail mix things have changed as price becomes more important to consumers. During the economic hard times, people have tended to trade down from organic to free range, and from premium indoor systems to value farm assured. What is important is that we still give them a choice.

There are challenges – much of the industry’s infrastructure needs upgrading and there is not much money to pay for it. Planning and environmental controls are another restriction. But demand remains strong and overall I remain optimistic.