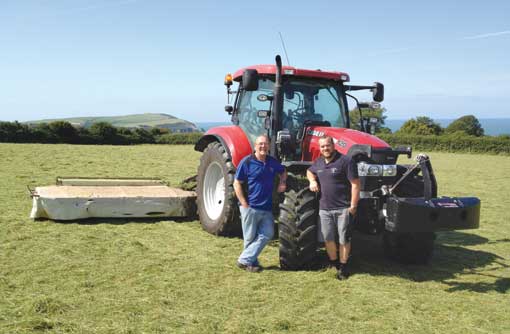 The focus is firmly on driving up grazing efficiency at our Welsh management matters farm. Debbie James reports

A new approach to soil testing has revealed some interesting results at Dinas Island Farm and should bring fertiliser cost savings and efficiencies.

With each field divided into four as part of the Perkins’ new grazing management strategy, they decided to sample the soil in each quarter instead of testing single fields. The results showed differences in nutrient levels, allowing inputs to be matched more accurately to the shortfalls.

“It quadrupled our testing, I think we had about 50 samples taken, but it will pay dividends,” says Neil. “We have bought neat phosphate, potash and prilled lime and will apply these precisely where they are needed instead of blanket treating whole fields.”

The variations can be explained by a number of factors such as rainfall washing nutrients down a sloping field or livestock favouring some parts of a field for lying down and others for grazing.

The tests cost £5 each and although no cost savings were achived this year, precision application allowed for a more targeted approach to nutrient management which will pay dividends in the long term.

This development is the first step in a new grazing efficiency plan being rolled out at Dinas Island Farm. The new system will highlight yield, utilisation and conversion rates of grass into kilogrammes of meat production.

The Perkins’ own system for measuring grass production flagged up a 37% difference between the best and worst performing fields.

They hope by adopting a grazing efficiency plan they can match the grassland performance to that of top dairy farms. Milk yield on dairy units is a definitive measure of grass quality and to translate this to sheep farming, the family aims to not only record grass yield but also the growth rates of lambs grazing each field. This data would be combined with the weight of the ewes at turnout and at weaning. The killing out percentage of the lambs at slaughter and the number of lambs finished will also be factored in.

“We will monitor field by field performance of the swards and identify the true potential of the grazing,” Neil explains. “Monitoring will record how production levels are increased by precision utilisation.”

Lower production swards will be identified, investigated and compared. “If all the swards are utilised efficiently through accurate measuring and budgeting the reason for the lower production can then be rectified.”

Roger says the ultimate goal is greater efficiency. “We want every field to be performing at the highest level it possibly can,” he says. “If for example we need to correct P and K to get there, if we can justify it, then it’s OK. We can all be guilty of throwing on nutrients but not really questioning if we are getting a return from it.”

A new member of staff has joined the team at Dinas Island Farm.Josh Banks, a graduate of Askham Bryan College, York is an assistant shephaerd under Neil and Roger and will help deliver the new efficiencies plan. “Josh has an interest in recording and interpreting data so he is just who we need to help us implement the new system. We wanted someone who could come in and really understand the business and he was just right for this,” says Neil.

Grass performance has been under pressure this summer after very dry and hot conditions kicked in from 6 July. All the winter silage had been cut before the dry spell started and the Perkins believed they had enough grass without applying nitrogen.

“We would normally apply a phase-release nitrogen in March to give us a good boost for the year but we didn’t do this because we had surplus silage from last year and knew the groups of ewes on rotation would have sufficient grass without nitrogen,” says Neil.

He admits he was then caught out by the exceptionally dry conditions. “We didn’t have a sufficient bank of grass and the fields burnt off as they tend do on the Island. We were a bit concerned but it coincided with weaning so we kept the ewes tight to dry off and gave the lambs the best grazing.”

He didn’t want to use any of the winter feed and had been on the point of buying hay when the dry spell finally broke. “The rain came just in time,” said Neil. “We applied Humber phased release fertiliser at 66kg of N/ha to catch up and the grass responded well.”

Lamb sales were not affected too greatly by the grass shortage because there was more quality in the grass they were eating. “There was better dry matter in the grass which meant that every mouthful they ate was good quality,p” said Neil.

Six hundred lambs have been sold so far with 240 sold immediately after weaning in mid-July, when the price was relatively strong. “The price has been more consistent this year, there have been less fluctuations. At an average price of £70 a lamb we have been fairly pleased with the price.

A further 600 ewe lambs have been retained as replacements for the closed flock – 400 of these would have made the fat lamb grade if they had not been kept for breeding. Although only 400 replacements are needed the Perkins’ are consistently lifting flock numbers. They are hoping to tup 1800 ewes and 400 ewe lambs this autumn and the 200 ewe lambs that don’t make the grade will be turned onto the cliff land for grazing and tupped as yearlings. A fair price (£43 a head) for 200 ewes culled recently will go a long way to covering the cost of the replacements.

The lambs were all given a Tracesure trace element bolus at weaning. “We have proven that we can pay for the bolus within three days with the extra daily liveweight gain,” said Neil. The ewe lambs and tups were bolused too. “We gave the ewes their annual MoT and bolused them at this time, this sets them up for the tupping season,” said Neil.

In future more emphasis will be placed on condition scoring throughout the year. The flock was recently split into three – thin, maintenance and fat groups. The Perkins’ are aiming for a uniform condition by tupping.

Although tupping isn’t until the beginning of October if the flock isn’t assessed at this stage it would be too late to rectify condition.

“We need to get them into the right condition to balance the scanning rates,” said Neil. “Condition scoring is going to be a tool we will use throughout the year, at housing, in the winter and at pre-tupping, to enable us to better manage their nutritional needs.”

Employing Josh will allow more time for incorporating measures such as this into the system. His arrival was timely as it coincided with a busy period at Dinas Island Farm, not only on the farm but at the family’s campsite and holiday cottage business too.

After a succession of wet summers, the dry spell heralded the return of the tourists. “The sunshine brought the visitors back after last year’s washout, which was an upside to the farm toasting in the heat,” said Roger.

In conjunction with advice and training body Farming Connect, the Perkins will be holding an open day on 5 September with grazing efficiency as its theme. The event begins at 12.30pm.