Following the publication of its Incentive on Connections Engagement (ICE) last year, which required DNOs to show how they are identifying and dealing with local grid constraints, the regulator is examining how effectively they are handling this process with a separate consultation.

DNOs that fail to meet customer expectations could be fined. 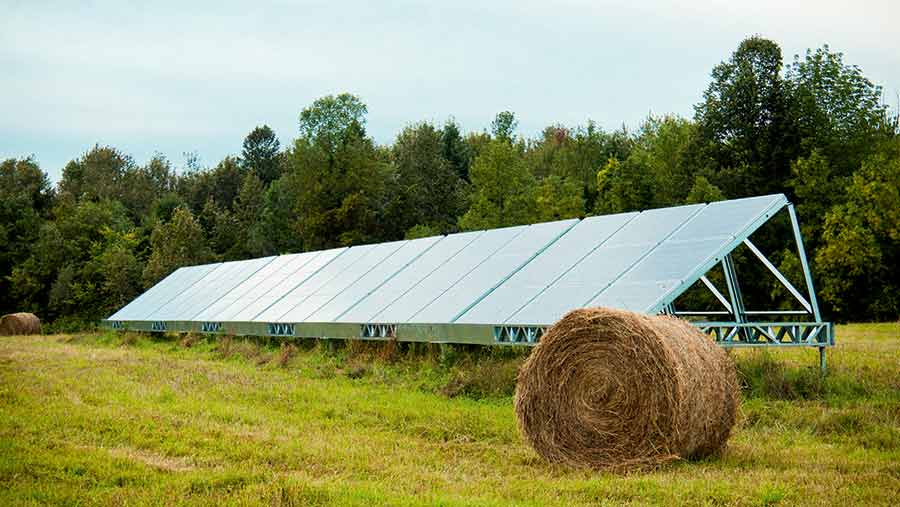 Lack of grid capacity is an ongoing issue for new connections in many parts of the country, often leaving farmers and landowners facing costly upgrades, long waiting times, or having to scale down projects to secure a connection offer or scrap plans altogether.

“In some instances the additional time and cost of connecting in a constrained area can make it virtually impossible to proceed. We expect DNOs to take efficient steps to try to avoid this happening,” Ofgem says.

Farmers Weekly asked DNOs to provide figures on available grid capacity and how much is already allocated to projects not yet built in each region, but most refused to comment directly.

The Energy Networks Association (ENA), which represents all DNOs, also failed to give specific figures, but says the growth of “distributed generation” (for example, from small-scale generation plants rather than industrial power stations) has far outstripped expectations.

Some 11.5GW has been connected since 2005, with solar deployment already beyond the level previously expected by 2030, it says.

In some instances the additional time and cost of connecting in a constrained area can make it virtually impossible to proceed. We expect DNOs to take efficient steps to try to avoid this happening Ofgem

The ENA insists all DNOs are already working to make more efficient use of available grid capacity through initiatives such as progression milestones and flexible grid offers.

Capacity constraints and delays for new connections are most acute in southern and south-western England, given the surge in solar energy projects.

Western Power Distribution covers much of this region. It was the only DNO to respond to Farmers Weekly’s request for information, pointing out that it currently has a queue of 7.6GW of new generation with an accepted grid offer but not yet connected across its four licence areas. More than half of this is solar panel schemes.

WPD has been one of the first DNOs to introduce new ways of getting more out of its grid network and speeding up connection times.

Projects now have to meet clearer milestones as they progress through planning, build, and final connection, with developers required to provide evidence when milestones are met or risk losing their connection offer.

Where a milestone is missed, customers must also show a scheme is still progressing to prevent project developers “sitting on” spare capacity.

In addition, WPD is offering to connect some generators, but only if they agree to cut output during periods when there is the highest demand from other generators supplying the grid.

There is no compensation payment for this and the terms of such offers depend on individual circumstances.

“We always endeavour to act in a fair and reasonable manner while balancing the needs of applicants who have invested considerable time and money and are experiencing planning delays against those who are perhaps ready to go but are subject to significant reinforcement costs,” it says.

“WPD is continually offering connections for generation but each offer could be subject to a connection date that is dependent on the completion of some reinforcement work either on our network or National Grid Electricity Transmission (NGET) network. We use alternative connection offers to speed up connections and enable customers to avoid high reinforcement costs.”

DNOs own and operate the network of towers and cables that transfer electricity from the National Grid’s transmission network to homes and businesses; they do not sell electricity. Each has its own arrangements for new connections.

The Department of Energy and Climate Change (DECC) is consulting on plans to reintroduce upfront fees for grid connection applications in a bid to deter multiple and speculative connection requests.

Applications are currently free to all customers and only those that accept an offer have to pay the assessment and design costs incurred by the DNO (costs such as drawing-up plans, undertaking surveys).

DECC acknowledges there are concerns about how any upfront A&D fees would be applied and what impact they could have on smaller-scale and community projects in particular.

Fees could be set in different ways; either a variable charge based on the specific costs associated with an individual project, or a flat fee for all grid applications.

The ENA has proposed an upfront flat A&D fee ranging from £150 to £1,000 depending on the size of the project.