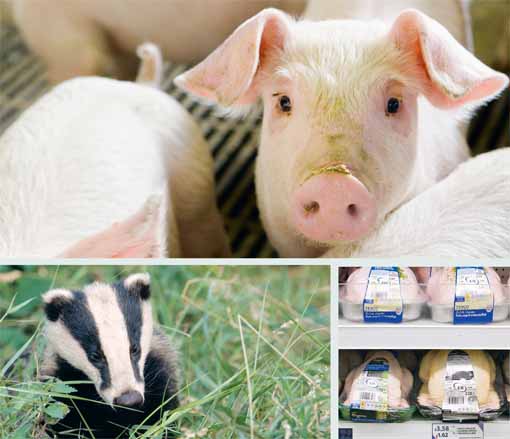 A new year presents an ideal opportunity for a bit of crystal ball gazing. Olivia Cooper finds out what 2012 might hold in store

“The TB pilot culls will be a major part of 2012, and we need to make sure they go forward successfully. Everything that has been unravelling in Europe is also a massive issue, because 40% of the EU spend is on the CAP. We need to make sure that the government doesn’t forget farming while in political negotiations in the EU. The exchange rate also has a huge influence on farmers’ incomes. There is going to be pain as the economy struggles, and we need to paint farming as delivering solutions – food and farming exports are up 13% year on year – we are creating jobs and balancing the economy. We need the government to really engage in what we can deliver, and make sure we get our language right about the importance of farming.”

“There will be real opportunities for small to medium-sized enterprises under the government’s Growth Review. In the future every farm will be doing something in terms of renewable energy: 2012 may the year in which that starts. The National planning policy framework is another consideration and we really hope the government sticks to its guns with the presumption in favour of development. Finally, the focus of the world will be on the UK because of the Olympics; let’s make the countryside a part of that.”

“There is little doubt the detailed development of the new CAP and possible support arrangements for Scotland will dominate the agenda. The cornerstone of the system will be the basic area payment; it is a blunt tool, and structuring zones and directing support to farming activity will be the biggest challenge. This is a complex package and the detail is crucial if it is to be positive for Scotland.”

“I’m hoping that we will find a fair and equitable solution for all sectors during the move from historic to area-based CAP payments. The Glastir environment scheme needs refining, but hopefully we can start looking forward on that.

“I’m pleased that England is moving forward with addressing TB in wildlife – our Welsh minister will be making an announcement in the New Year and hopefully we can then start to tackle TB in hotspots. We also had good news on electronic identification earlier in December – but we need to work on greater tolerance levels and not tag breeding ewes until there is a change in ownership.”

“The future of the Single Farm Payment post 2013 is the biggest single issue for our members and unfortunately the CAP Reform proposals have been a big disappointment, set against significant uncertainty about the future of the euro and the European budget. In 2012 we’ll be hoping for stability, not volatility.

“A key objective will be to see meaningful progress in introducing a Supermarket Adjudicator – the Supermarket Code of Practice will have no clout until then. Another challenge will be to overcome the wave of farm thefts that have plagued the industry. Nevertheless it’s a time of optimism for agriculture and hopefully 2012 will be a good year for all.”

“There are three areas of concern for us in the coming year: a significant number of rent reviews are planned, which will set rates for the next three years. With extreme volatility in commodity markets there is a huge amount of uncertainty, which is a big issue. The second concern is CAP reform – we need to get the definition of active farmer right, and must avoid land banking by landlords seeking to maximise their 2014 claim. Finally, there is the consultation over planning policy, which seeks to allow greater flexibility for alternative uses of agricultural buildings. That could be very concerning to tenants who may lose buildings which are important to their farming operations, so we need to make provisions for that.”

“We’ve got to hope there will be better weather – I would really like for 2012 to be a year when I won’t be a miserable, moaning farmer. Interest rates are still low, which is a great thing for business expansion. But the price of nitrogen fertiliser is a huge problem, and I think it will keep on marching forward. It’s also looking more and more likely that the EU will lift the ban on Argentinian and Brazilian beef, which is a bit of a concern. But the big one for us is what ewe prices are going to do – and that will depend on export demand.”

“In Northern Ireland the price of beef is dropping, and we are worried the recession is going to bite here first. Tesco can’t sell beef over here and there are very few abattoirs supplying markets outside of GB, which is a worry. We are 25-35p/kg behind GB at the moment, and farmers in NI will have to tighten their belts. That said, if the weather is kind we can grow grass very well, and if we can have the same weather as this year that would be fantastic.”

“I think demand for dairy products should be good next year, so I’m fairly positive in terms of milk price. I think co-operatives will gain market share because people realise that they’re working for the farmers. I can also see more incentives and initiatives on the health and welfare front, with carbon footprinting coming to the fore. If farmers’ production costs are already under control, there’s a fair bit of opportunity for 2012.”

“It sounds a bit boring, but 2012 will be about managing volatility. The amount of capital employed in growing crops is huge, and it’s essential to manage that risk, both in terms of input costs and output prices. So much of it is out of our control, and the economic picture does have a knock-on effect, which leaves everyone rather nervous. This year we aimed to get 5t/ha and averaged 5.5t/ha – if we could get over 5t/ha again it would be good, to prove it wasn’t a fluke and that it can be done consistently.”

“One of the biggest concerns is that there is a retailer price war going on, and chicken products are at the forefront of any cheap deals. As feed prices are getting lower supermarkets and processors are battling for their share of the marketplace. However, when feed costs were high we never got the higher chicken prices that we needed, so there have been price pressures on both sides.

“How long that pressure is going to go on for I don’t know. World wheat stocks and production are at near record highs, and that must have a downward effect on prices – but a year in farming is a long time, and you only need a few crop failures and for the speculators to come in, and off the market goes again.”

“Recent trends in reduced feed costs and rising weaner pig prices suggest that financial prospects look brighter in 2012. If the European ban on pig production from sow stall systems is rigorously enforced on 1 January 2013, there will be a dramatic reduction in the size of the European sow herd. But early indications relating to illegal egg imports suggest that the industry cannot rely on the UK government or the EU Commission to guarantee compliance.

“The industry must unite to promote Red Tractor pork and hold processors to account for their weekly shout prices, possibly through a new pig price formula that is a genuine reflection of market trends. For the industry to remain competitive, the highest standards of management are needed. But after a dismal 2011, I think confidence will slowly return to the sector in 2012.”