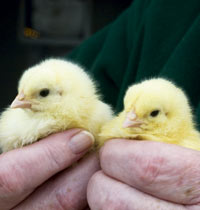 Having the freedom to choose where to source feed and chicks can mean an extra 4p/kg for broiler producers.

In the north-west, a revolution has started with several broiler growers regaining full control of their business by switching from an integrator to a local independent packer – Gafoor Foods.

“We want to give producers the opportunity to control their own business and earn more, said Vic Rhodes of Gafoor.

“We are giving them their farms back.

“With integrators, producers are given the mindset that they are getting a good return on chicken. But because they have to buy the feed and chicks from the company, it is difficult to work out what they get back.

“They [integrators] can charge more for feed and chicks and in my experience, it works out at 4-5p/kg less than those with no tie in with feed and chicks.” 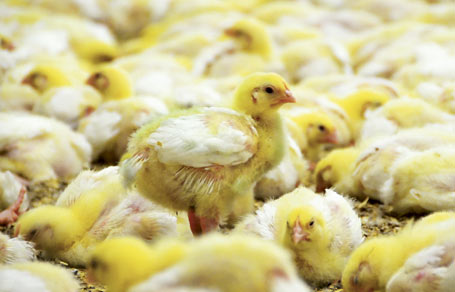 Gafoor moved to its new Preston site in 2005 and production has increased to 350,000 birds a week. “Demand is so great that we are looking to recruit new producers allowing throughput to grow to 500,000 birds,” explains Tahir Vaza, joint managing director.

Halal is the fastest growing sector of poultry and demand is very strong. Year-on-year growth is about 10% and the firm has seen its turnover grow from £8m in 2005 to this year’s expected £43m.

“Many companies seek us out for our halal guarantee, such as airline meal manufacturers,” says Mr Vaza.

Another benefit with supplying Gafoor is that they don’t insist on onerous rules, keeping the standards simple and not specifying a breed.

“Producers are the chicken experts,” said Mr Rhodes. “They are better at growing chicken than us and they know how to grow better quality chicken to take advantage of the financial incentive.”

All producers are on a nine-week cycle rearing chicks, as sexed, with pullets that reach 1.5kg at 35 days being thinned out first, followed by the rest at 42 days, while cockerels are taken to 55 days. This enables growers to make full use of the shed.

Gafoor supplies a broad spectrum of customers across the UK including ethnic retailers, caterers, ready meal manufacturers and the service sector. Products include whole birds from 700g to 3kg carcass weight, portions and mixes.

“They want the integrity of our product and they know we are regularly inspected, including regular unannounced visits,” says Mr Vaza.

“Our customers know it is guaranteed halal without any tampering. We don’t buy in any other chilled produce to repackage. Everything that goes through our factory is sourced from farms reared in the UK.”

Alan Swale has been rearing broilers in his 34,000-bird shed since 1996, as a diversification from his dairy business.

He is in the top 5% of dairy businesses in the UK, directly selling 6.5m litres a year from a herd of 300 cows.

He decided on broilers as it fitted in well with his dairy enterprise and built a shed alongside the dairy unit.

“Broiler production is not hard work, but you are tied to the unit,” he explains. “But we already have staff on hand to check birds four times a day and we use the dairy staff to carry out other tasks, such as cleaning out.

“Another benefit is that we can use the litter as a fertiliser to grow 15 acres of wheat on our arable land.”

Several years ago, he was becoming frustrated with the small margins. “I got fed up of going to producer meetings and hearing retailers telling us that we had to tighten our belts.

So he dropped in on his local poultry company on the way back from one of these meetings to find out more and decided to sign up. He liked the idea of more independence, being a fully independent dairy producer.

He also saw supplying a bespoke (ethnic) market as an advantage, which is not under the same pressures as the main retail side.

“The arrangement with Gafoor is working well and we are now making money. I wouldn’t grow chicken again for one of the major integrators.”

There was also the cost and hassle of complying with all the rules. “You get company representatives crawling all over your sheds to see if you are complying with their latest new directive. There seemed to be a lot of barmy rules.”

He used to buy chicks and feed from the integrator, but is now buying it cheaper from his local supplier Massey Feeds. He also gets a reduction for transporting his feed, as the Swale family have their own wagon. Chicks are supplied by PD Hook.

He concludes: “I am completely independent and making a decent return and I am happy.”

Ray White rears 130,000 birds with his daughter as part of their diverse farming operation in north Shropshire.

They have been growing chicken for the firm for a year now and it has proved successful.

The weight profile has meant they can get the maximum weight out of their site with out too many expensive turnarounds.

“Being able to buy our own feed has also brought substantial savings,” said Mr White.